Byron - time to blame the parents?

I blame the parents. That's the real conclusion of the Byron review. She says we lack confidence and awareness when it comes to the digital world. 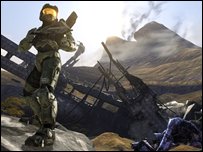 We plonk our children down in front of the internet as if it's the television when it's more like opening the door and letting them play in the road unsupervised. We don't take the trouble to understand the games rating system, and we let our ten-year-olds play Halo 3 without a murmur.

Guilty? Well as a technology correspondent who also happens to be the father of two mad keen gamers and web users - aged 17 and nine - I thought I was in the clear. I knew what they were up to online and I understood what kind of games they were playing. But now I'm not so sure. I've realised that I've only just got to grips with games classification and I'm pretty ignorant about where my sons are surfing.

For some years the sound of warfare has echoed down our stairs from a teenager's bedroom, home to a couple of consoles and a PC. I've given up monitoring closely what he plays or where he goes online. I suppose the key moment was when he stopped using the household computer in the living room - where we could watch what was going on - and got his own in his room when he was 15. Too early to allow unfettered access? Well I suppose it's a question of trust - and we thought our son was pretty sensible. He is impatient with the idea that he and his fellow gamers can't distinguish between virtual warfare and the real thing - and I think he has a point.

But what about the nine-year-old? He is mad keen on video games and likes to lean over his brother's shoulder to watch him playing. I quizzed him about violent games (Halo 3 arrived in the house a few weeks ago) over the breakfast table this morning. "I don't play them," he said - he's still at the Super Mario Phase. "And Adam won't let me watch him playing them."

So on the gaming front I'm lucky enough to have a responsible teenager policing his younger brother. But what about the internet? We haven't put filtering software on the computer nine year old Rufus uses, as he only spends time on neopets or other innocuous sites. "Oh, and I like YouTube," he revealed to me this morning. Alarm bells began to ring. At today's press conference Dr Tanya Byron revealed that she had asked the Schools and Culture Secretaries whether they knew what the age limit was for watching YouTube. They didn't know - and neither did I. It is 13. Rufus says he only watches "funny videos about cats and dogs", but we all know that there is plenty of material on YouTube that you wouldn't want any child to see.

Now I've just been hunting for that age restriction on the site - and it is buried a long way down. So businesses like YouTube and the social networking sites need to give far better and clearer guidance. But I think Tanya Byron is right to emphasise the need for parents to get their act together. We may think we are up to speed with technology - but our children are often ahead of the game. It's up to us to keep up.

Good decision keeping him away from Halo 3, if he were to get the idea that shooting aliens with energy weapons was a "goal" at his impressionable age, he may go out and try it in real life, and then where would we be?

On the other hand if we ever get invaded by murderous aliens, your son could be in real danger having had no preparation whatsoever.

It's a fine balance this parental control thing and no mistake.

What amazes me the most is that the findings of this report are the same things that gamers themselves have been saying for years; more education for the parents and a better, clearer system of ratings.

It's irritating, as someone who's been playing computer/videogames for nearly 30 years now, that our views on the subject are ignored by the powers that be and yet when a 'professional' offers these same opinions politicians cannot jump up quick enough to say they'll push ahead with them!

Tendency towards violence comes from the knowledge that there is no consequence to ones actions. The awareness of teenages that there is little real punishment for unruliness has more to do with the growth in violence than computer games...

I played soldiers with toy guns when I was a kid in the 60s, and went through the whole 'Kung Fu' era when we beat each other with home made 'Nun Chuka' in the 70's. In the 80s and the coming of video I watched completely inappropriate movies at friends houses, and in the 90s I played 'violent' computer games with my kids.

So why have I NEVER felt the need to beat another human being to within an inch of their life?

Because I was brought up to understand CONSEQUENCES.

The two teenage boys who beat a girl to death in a park because she was dressed as a Goth didn't do so because the played too many computer games. They did so because they had no moral barometer...

Police commented how, during questioning, the boys LAUGHED and JOKED with their parents!

Doesn't THIS tell us what is wrong in our society?

I'd feel happier is certain parents came with a certificate or government health warning.

Video/computer gaming is a leisure activity, in the same way football, dancing, or knitting is. It serves the same function in allowing people to either relax, reduce stress or spend time to reduce boredom. The main issue is that parents perhaps do not have the same level of involvement in the activity of gaming as they may do in their child's other leisure activities. After a training session at football, most parents would ask their child "So how many goals did you score?" for example. With gaming, however, I cannot anticipate there would be questions like "So how many points did you score by shooting those aliens?"
It is down to a question of parents' involvement surrounding their child's interest in gaming as a leisure activity.

I thought games with mythical & fantastic settings would be fine. So allowing the ankle biters to play supervised games of the 1980's classic "Ramage" till I discovered that they were playing a live action version of it, which involved thumping each other.........so its strictly Cbeebies from now on.

Nobody who has followed the House of Tiny Tearaways on BBC3 can doubt the weight of evidence behind what Doctor Tanya is saying. Those who criticise her need to be very careful: she has demi-goddess status amongst many parents of young children who will take what she says very seriously indeed.

Yes we are firmly in to blame the parents terratory, something I fully agree with. Over the past few years "parents" have got younger and we find ourselves with teenagers haveing children. At that point in their lives, a teenager's life experience is next to nothing, so they don't actually understand what being a parent is.

I think we should start by enforcing the current laws: i.e. enforce the age of consent (for a start). Obviously a 14 year old who is pregnant has had sex. As bad as it may sound, this should result in an abortion on the grounds it's the result of an illegal act. If I steal a car, I don't get to keep it, do I.

After that, it must be shown that you are in a proper, stable relationship, maybe even married, before you can have children. We'll end up with a lot less single parents sponging off the state at this point too.

I became a parent at 25, I'm now 37. I have instilled in my children that there are consquences to their actions, both good and bad (so it's not been all punishment).

Start with society and it's attitude to parents and parenting, and everything will gradually fall back into place.

I guess you just have to play it by ear where age ratings are concerned and judge each individual case and just make sure you are involved in the childs thought processes.

If a child has a tv in the bedroom then they have access to programmes that are aimed at adults at anytime after 9pm but I doubt many adults think that their kids are up watching those strange late night programmes that are all over our screens these days. Gender re-assignment in graphic detail for example. Not something I would actively encourage any child to watch and something I'm glad I didnt happen to see when roaming the post-watershed proggrammes when I was growing up just because of the confusion and misunderstandings it could of caused.

There are plenty of weird and wonderful programmes as well as websites and games but in the end talking to your kids about issues like sex, drugs and violence is pretty much the only way you can be sure you are having a positive as well as informative influence on them. If you dont tell them about these issues - someone else will.

Personally I think that the idea of applying technical restrictions such as net nanny on computers is pointless.

Although it may stop the little ones, the teenagers would get annoyed with it and find out how to get past it, making it obsolete. Also it shows a leaning towards the 'easy solution', if you can't teach them to not go on it, block them out of it.

Teaching students about net safety ought to be in the school curriculum, and not just 'the net is a very dangerous place and should not be touched without net nanny'. Teaching about things like anti viruses and firewalls, and how to use them, including free ones like AVG and Zonealarm free.

Although it can't really be taught, common sense is important as well, something which sadly, this society seems to have lost over the years.

I guess you just have to play it by ear where age ratings are concerned and judge each individual case and just make sure you are involved in the childs thought processes.

If a child has a tv in the bedroom then they have access to programmes that are aimed at adults at anytime after 9pm but I doubt many adults think that their kids are up watching those strange late night programmes that are all over our screens these days. Gender re-assignment in graphic detail for example. Not something I would actively encourage any child to watch and something I'm glad I didnt happen to see when roaming the post-watershed proggrammes when I was growing up.

There are plenty of weird and wonderful programmes as well as websites and games but in the end talking to your kids about issues like sex, drugs and violence is pretty much the only way you can be sure you are having a positive as well as informative influence on them. If you dont tell them about these issues - someone else will and you may not like the things that are taught.