Brent Hoberman and the art of timing 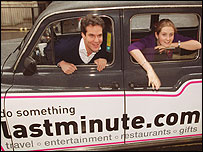 Ten years ago one of the very few people to make money out of Britain’s dot com bubble was just getting started. He launched a travel website into a market suddenly obsessed with the idea that the internet would transform every business and make huge fortunes for those who could grab a slice of the action.

His name was Brent Hoberman and the business he started with Martha Lane Fox was Lastminute.com.

For Brent Hoberman, timing was all. Lastminute was a tiny business with negligible revenues in March 2000 but when it arrived on the London Stock Exchange it was valued at over half a billion pounds.

A fortnight later the bubble burst and soon tech stocks were only useful for papering the bathroom. Lastminute had raised the cash it needed to survive in the nick of time.

Now a decade on Brent Hoberman is launching another business – and this time it’s aimed not at twenty-somethings looking for a cheap weekend in Tallinn but at thirty-somethings wondering whether to paint the new kitchen olive green or fire red.

Mydeco has got everything – links to major retailers, a 3D home design tool, and that Web 2.0 cliché “community”, with ways to share your ideas about giving your kitchen a facelift with fellow users.

It has been far longer in the planning than Hoberman’s first venture and has raised £5 million in funding, compared to the £600,000 backing which got Lastminute off the drawing-board.

In 1998, there was still a relatively small internet audience – this time just about anyone who might have some cash to spend on doing up their home has already got a broadband connection.

But – and it’s a huge but – Mydeco could be a victim of bad timing. It launches into a crowded market just as the tech investment climate grows chilly, and at the very moment when consumers are getting more cautious about parting with their cash.

If the site’s backers want to recoup their investment via an IPO, they may have to be very patient. However Brent Hoberman has pulled in big names from Europe’s web scene like the Skype founder Niklas Zennstrom and insists they are in it for the long term.

Lastminute.com was a symbol of all the energy – and idiocy – of the UK’s dot com bubble. Mydeco will be far more low-profile in a more mature market but its progress will tell us whether the latest bout of bubble thinking is over.

Brent Hoberman tells me he is relying on what he calls counter-cyclical start-up theory. “When the big players retrench, the opportunities to innovate increase. Going against the grain is where entrepreneurs win.”

Good luck to him - he's one of the nicest guys to have emerged in British business in the last decade. But I fear this time Brent Hoberman's timing may be just a little out…

I saw the mydeco thing on techcrunch this morning. Interestingly enough they take a different view of the impact of a downturn. Focusing instead on the reliance the inventory-heavy principals will place on their virtual intermediary friends to help drive incremental sales, it thinks that (as intermediaries often do) it will bounce during a depressed market. The techcrunch blog ends: "This is a pretty serious play. Although furniture stores are hurting in the credit crunch they are likely to put money into intermediaries like this to increase customer acquisition during tough times ahead."

Good luck to the guy, i wonder if his thinking is; that those who cant buy a new house because they're too expensive at the moment will just do up thier kitchen...

Fantastic idea, if you've ever had to trawl through a mine field of design books to create a mood board then Mydeco is going to make the hard work much more simpler. Ikea does something similar on their own brand lines I wonder how this compares.

I don't think any talk of recession or market downturn is likely to impact this sort of venture - people will always need somewhere to live and will want to spend time making that environment a better place. If anything, I expect these sorts of sites to help users save money by giving them comparison info that they wouldn't otherwise have had, just like moneysupermarket and co have done.

Well done that man! The timing of this new adventure, as you say, might be not the best but if it is as half as successful or useful as lastminute.com then I am sure many will benefit from it.

Surely his timing is perfect - he already has his funding, whereas any competitors will have to face the latest market constraints.

I don't expect the growth of the web and web shopping to slow!

I had the idea when I was walking in a large multiple in the early 90's!

An interactive room set, now in 2008 how about an environment that is eco friendly/design and energy friendly!

To plan help and advise cost time and this limits time in an non pressurised sales environment.

My idea works for the contract market, with backing and money it would either bolt on or perhaps be a useful commercial tool...