Logging out... and straight back in

As I hinted at in my previous post, Maggie Shiels and I will spend 2010 each with our own blog - closely linked, of course. You can start reading dot.Rory now, with a post from San Francisco, and Maggie will start posting at dot.Maggie tomorrow. For those of you comfortable with RSS feeds, here is mine, and here is Maggie's.

In Las Vegas next week, a twenty-five year journey could come to a successful conclusion, when a British company launches what it believes will be a triumphant combination of science and technology. Plastic Logic's e-reader, the Que, will be unveiled on the opening morning of the Consumer Electronics Show. It could be one of the show's stand-out products - or it could end up buried under an avalanche of hype about a forthcoming rival device from a better-known firm.

This journey began in the 1980s at Cambridge University's world-renowned Cavendish laboratory, where the physicist Richard Friend was working on carbon-based materials for semi-conductors. He tried and failed to get electronics companies interested in the plastic light-emitting diodes which emerged from his research - but when he teamed up with another Cambridge lecturer Henning Sirringhaus, they ended up finding ways to print transistors onto plastic. It was this work which led to the development of the light, flexible displays which Plastic Logic believes will revolutionise the way we read.

On a snowy day just before Christmas, I went to meet the two men at Plastic Logic's offices on the Cambridge Science Park. They are both still teaching at the university, while keeping an eye on the progress of the firm they founded in 2000. And while it has taken a decade for Plastic Logic to bring its first product to market, Sir Richard - he was knighted in 2003 - was confident that the long wait would be worthwhile:

"The most impressive thing is it's an integration of fundamental science and world-leading engineering - it's the thing that the British are not supposed to be able to do."

At that stage, they were not able to show me the final product, but I was allowed to handle prototype displays developed in Cambridge and then manufactured at their plant in Dresden.

They are light and flexible, and Professor Sirringhaus told me the aim was to provide the same experience you get from paper, rather than the one you get from the glass which is needed for conventional screens:

"The whole reading experience is about holding something that is unbreakable.
"It's light; you can treat it like paper; you can stuff it in your briefcase. If you want to read a business document or paper, then the weight of the glass used in conventional technology is quite significant."

Plastic Logic has signed deals with a number of major newspaper groups, including the Financial Times and USA Today, to make their titles available each day on the Que e-reader. The product, which will enter a fast-growing market dominated by products like the Amazon Kindle and the Sony Reader, will be aimed principally at the business market. While the technology would permit a roll-up screen, it seems they've gone for something more conventional, so the Que may not look that different from e-readers with a glass screen. 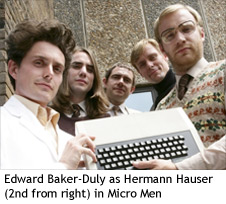 The other crucial figure in the story of Plastic Logic is Herman Hauser, the scientist and venture capitalist who's been involved in many of the ground-breaking businesses to emerge from Cambridge over the last two decades - you may have caught him in Micro Men, BBC4's recent drama about the rivalry between Sinclair and Acorn Computers. He put up the money back in 2000 which allowed Friend and Sirringhaus to form Plastic Logic, and he's been instrumental in raising more finance as the years have gone by.

What's really amazing about this business is that that it has gone all the way from research in a laboratory, to manufacturing a product, to building a global sales and marketing team - much of that operation is now based in California - without sacrificing its independence. Which might just be a mistake. A less courageous option would have been to license its technology to Amazon or Sony - or maybe Apple - and let them use their undoubted marketing expertise to sell the idea of plastic displays to the world.

There are now convincing reports that Apple has an event scheduled for late January where it will unveil a mystery new product. The blogs and fan sites are alive with feverish speculation about the iSlate - supposedly the name of a tablet computer which will provide everything from books, TV programmes and music to the solution to global warming.

I'm as fascinated as anyone to see what Apple really has been hiding up Steve Jobs' sleeve, but I hope that amid all the hullabaloo, the launch of Plastic Logic's Que next Thursday will not be overlooked. I will be in the United States to cover this and a number of other technology stories next week, when this blog will have a new look and a new name. So thanks for listening in 2009 - and see you next year.

Spinvox: The end of the saga

The call with news of a deal in the technology sector came mid-afternoon on 30 December, a day when much more important news was breaking, so I realise that the sale of Spinvox to Nuance may not attract a lot of attention. But it brings to an end the remarkable and rather sad story of what seemed to be one of Britain's most promising young technology businesses.

At the beginning of 2009, Spinvox was apparently riding high, winning awards for its ground-breaking voice recognition technology, recruiting some of the brightest and best in the telecoms and marketing industries, and signing big contracts with the world's leading telecoms operators. But behind the scenes, it was wrestling with huge issues surrounding both its technology and its finances - issues that we revealed on this site in July (see here, here and here).

Now a company that had raised well over $200m from blue-riband backers like Goldman Sachs and Carphone Warehouse has been sold for $102.5m (around £64m) and about a third of that in Nuance shares rather than cash. The Nuance press release unveiling the deal makes no mention of the company's founders Christina Domecq and Daniel Doulton, and in fact features no quote from anyone at Spinvox - highly unusual in this kind of announcement. So the deal raises a number of questions, which I've put to both Nuance and to Spinvox

(1) Will the backers get their money back?

Neither company was at all forthcoming on this issue; but bearing in mind that a £30m loan - due before Christmas - needs to be repaid, it appears there's little left for the investors. Those who were in at the start - like Carphone Warehouse - may have written off their stakes already. As for Christina Domecq, who at one stage had the biggest stake: hers were ordinary shares, so will rank behind those of investors who came in with refinancing late in the day.

(2) What happens to Christina Domecq and Daniel Doulton?

The chief executive Christina Domecq - and to a lesser extent her co-founder Daniel Doulton - were highly-visible standard-bearers for the company until this summer, since when they have disappeared entirely from view. So will either or both stay on? "We're talking to them... a lot of knowledge, a lot of history, a lot of capability in those folks," was what Rich Green of Nuance told me about the founders, but he would go no further.

(3) Will the staff, and in particular the Cambridge Speech Lab, be retained by Nuance?

Again, Mr Green was complimentary about the skills of the Spinvox staff and in particular about its Advanced Speech Group at Cambridge headed by Dr Tony Robinson. "Spinvox has a lot of great people, Cambridge is part of the value of what we're acquiring." But he could not give any details of who would be retained by Nuance, explaining that there would be an "integration process" over the coming weeks. One former employee tells me that a number of current staff are planning to hand in their notice on Monday, in the expectation that they have no future with the company.

(4) Why is Nuance doing this deal?

Nuance told me back in the summer that Spinvox had no technology that it didn't have already. And this afternoon, Rich Green repeated that: "Nuance voice-to-text technology is second to none." So why on Earth is it buying Spinvox? Surely it's the chance to take over those contracts with global telecoms firms? "The contracts and global coverage are part of it," he granted, and went on to explain that Spinvox brought a lot of operational expertise to the party. That expertise, of course, extends to the operation of call-centres around the world, and it's not entirely clear how many of them will be retained by Nuance. But at just over $100m, the deal may seem to the American company a reasonably cheap way of reinforcing its position as a leading speech-recognition firm while being introduced to some big potential customers.

So the curtain may have fallen on the Spinvox saga - but there are still plenty of questions left unanswered.

Last night, I was contacted by someone who pointed out that I'd omitted one key question: what happens to Spinvox's data?

I'm told by a reliable source that over 100 million voicemail messages dating back to 2006 - both the audio and the transcribed text - are still stored by Spinvox, amounting to 100 terabytes. It's a very valuable resource - so much so that I'm told that a major search engine company was also looking at buying the business in recent months, making it clear that it was interested only in the data - not in the technology.

Now a spokesman for Spinvox has confirmed to me that all of that data will simply be handed over to Nuance as part of the deal.

There are obvious privacy issues here: did Spinvox users realise when they signed up that their private messages might be stored for years, then handed over to an American company?

This was dot.life - a blog about technology from BBC News.

Update: Rory and Maggie have now moved to dot.Rory and dot.Maggie.

Gadgets of the Noughties

Just before Christmas I spent a very enjoyable day at home playing with gadgets with two technology pundits. Yes, I know it doesn't sound arduous, but it was work - we were filming a report for BBC Breakfast on the...

As the year draws to a close, I've been looking back at some of the stories I've covered here, and trying to work out what 2009 really told us about technology. It's been a year which has seen Windows, Mac...

I know how much some of you hate stories that mention a certain microblogging service - but Twitter is the source of two interesting stories today. First of all, it disappeared for about an hour at around 06:00, with the...

Readers of "mommy blogger" Shellie Ross are used to her sharing information about her life through her blog and also through her Twitter stream. No-one, however, expected a tweet she sent out on Monday that has sparked a storm of...