On 4 November, Rahim Al-Haj will be a first-time voter. His eyes were wide with boyish enthusiasm as he told me how excited he was at the prospect of exercising his democratic right. But Rahim was no callow 18-year-old straight out of high school.

Imprisoned and tortured in his native Iraq for his opposition to Saddam Hussein's regime, Rahim, 40, became an American citizen at a ceremony on 16 August, having arrived here as a refugee eight years ago.

"I cried that day," he told me. "And the very first thing I did afterwards was fill in a voter registration form.

"My polling card arrived this morning. I picked it up and did this," he said as he mimed kissing it. 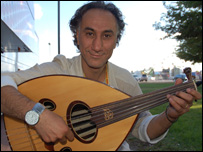 But Rahim didn't want to be thought of as a dissident or a political activist. He's an exceptionally skilled musician, one of the world's most accomplished players of the oud - a lute-like stringed instrument whose origins date back over 5,000 years.

I asked him to play for me. He obliged with a quick-paced, melancholy composition. His affinity with the instrument and the gentle, mournful sound it produced was striking.

"It's much more intimate than a guitar," he explained as he strummed. "You have to hug it like you'd hug your wife or girlfriend."

As a small boy, his bond with his oud was so strong that he used to sleep with it in its carry case. His love of music won him a string of awards and a place at the Institute of Music in his native Baghdad.

But it was Rahim's passion for composing and performing that forced him into exile. He used his talent and popularity to speak out against the regime by writing songs which protested against the Iran-Iraq war.

The authorities didn't hesitate. His recordings were banned and he was thrown into prison at the mercy of Saddam's torturers.

"But worst degradation was that they took my oud away," he recalled. "I'd practice playing on my wrist. It was as though I could hear the music."

After he was released from prison during the first Gulf War, Rahim fled the country using false papers. But because musicians had to declare their instruments before leaving Iraq, he had to leave the oud behind.

He went to Jordan before settling in Syria, where he met his wife and stayed for eight years. But when Iraq and Syria restored diplomatic relations in 1998, he had to leave again - this time for the USA.

The United Nations refugee agency sent him to Albuquerque, New Mexico, because they thought the desert landscape would remind him of home.

At first it seemed strange to him. It wasn't the bustling New York-style metropolis he had expected. But as he learned English and made friends, it became his favourite place in the world.

Rahim's career flourished. He played with symphony orchestras in New York and teaches music at the University of New Mexico. In 2008 he was nominated for a Grammy. And like any American, he exercised his constitutional right to complain about the state of the nation.

"America is a wonderful place - the country is gorgeous and the people are so open and welcoming," he said.

"But Americans are very isolated. The only people around them are the Mexicans, who they treat badly, and the Canadians, who are just like them.

"If I can do anything while I'm here, I'd like to help them understand other parts of the world."

I asked him how he was planning to use his first-ever free vote. The answer came back on the beat: Obama. The occupation of his homeland had been a disaster, he said.

"I had mixed feeling when Saddam was overthrown because he was such a terrible man," Rahim said. "But I also saw the devastation and the suffering that my people experienced as a result of the invasion.

"When there's a snake in your house, you don't destroy the house to get rid of it. But there have been four million people displaced in Iraq, one million dead, Shia turned against Sunni.

"It isn't just about Iraq. We need change at home too. Ask anyone about how the economy's affecting them. The Americans have suffered under Bush, too."

Before I left, we embraced. He made me promise never to take my right to vote for granted again. 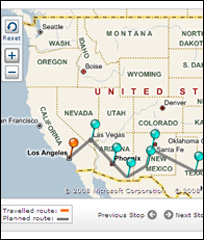