It looks like a still from The Sopranos, and in a way, it is. It’s a snapshot of the Ulster punk mafia, mooching around Gordon Street, Belfast after the press launch for the upcoming Undertones/Good Vibrations gig. 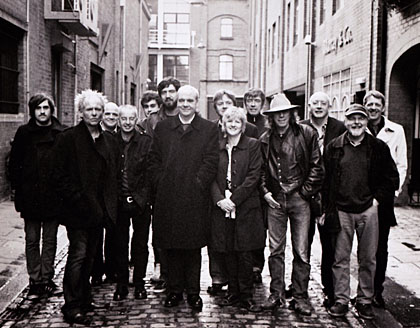 The Mandela Hall, April 25. It’s an offer you can’t refuse.

Stu Bailie presents The Late show on Radio Ulster, every Friday from 10pm until midnight. See his playlist here.

Yes, it is the Mafia! Still this is a crowd to be proud of! Can I be a gangsters's moll? I fancy being Carmella, always loved her clothes! Am buying (unless he's on the guest list)Gerry a ticket as this is the night before his birthday! Viv

Music journalist and BBC Radio Ulster presenter Stuart Bailie writes on music and culture and opens up the archives on his long career in the business.

You can stay up to date with Stuart Bailie via these feeds.