Team PatAnya are Casualty star Patrick Robinson and dance partner Anya Garnis. A formidable pairing, at the age of 49, Patrick has already declared that he wants to be the oldest winner of SCD, and from his early performances he may just stand a chance.

Week One saw the couple perform an energetic Jive to ‘Runaway Baby’, and a dramatic Tango to Michael Jackson’s  ‘Beat It’ followed in week Two, which had Bruno describing it as... ‘Strong and gritty and very grounded, you went for it’’.

They suffered a slight set back in Week Five after Patrick injured his hand causing them to make last minute changes to their Salsa but they were soon back on track and scored a perfect 10 from Darcey in Week Seven for a stunning American Smooth that oozed style and sophistication.

Patrick and Anya spend plenty of time laughing during their training, but despite her diminutive stature Anya can be tough on Patrick when she needs to be.

If you're backing Team PatAnya this year, leave your messages below. 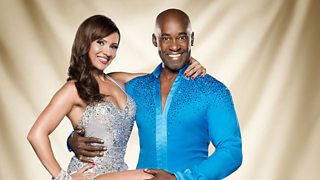