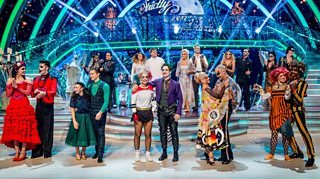 They took on the horrors of Halloween Week and came out the other side alive! But things are no less scary this week - we're more than halfway to the final, and with the standards getting higher and the Judges getting meaner, our remaining nine couples have a tough job ahead.

So what are the songs and dances they're tackling in an effort to top that leaderboard? Read on for the full list...

Yep, you read right - the first Argentine Tango of the series! Tune in to see this mighty song list come to life - Strictly shimmies onto BBC One this Saturday at 6:55pm. Until then, keep an eye on It Takes Two for a whole range of backstage brilliance with the lovely Zoe Ball.

Week Seveerrrn is coming - but is there a 10 on the cards?