Danny John-Jules is ready for Strictly 2018!

Star of stage and screen Danny John-Jules will be focusing on perfecting his dancefloor prowess as he joins Strictly 2018. 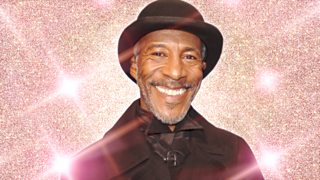 The born-and-bred Londoner has been a mainstay on our televisions for decades, best known for his portrayal of the stylish and side-splitting Cat in Red Dwarf. In fact, he was one of the few cast members to appear in every single one of its 52 episodes. He then jumped (space)ship from sci-fi to detective drama, starring in successful BBC series Death in Paradise from 2011.

Off screen, Danny’s an avid motorcyclist and has also appeared in many theatre productions, including Cats, Barnum, Carmen Jones, and Starlight Express.

So we know he can act, but can he dance? It won’t be long until we find out!

He’ll be joining Katie Piper and Faye Tozer in the Ballroom, as well as the rest of our soon-to-be-revealed 2018 celebs. Be sure to follow us on Twitter, Facebook and Instagram for the next announcement very soon!

Katie Piper is our first Strictly star of 2018!