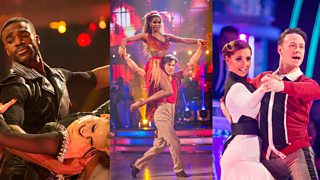 Doesn’t time fly when you’re having fun? We can barely believe the Strictly Grand Final is upon us already. This week, our three remaining couples are performing THREE dances each in a bid to take home the coveted glitter ball trophy – their Favourite Dance, a Showdance, and the Judges’ Pick.

Here’s a look at the routines our Strictly Final Three are busy preparing:

And the Judges’ Pick dances? Well, you’ll have to tune into BBC One on Saturday at 6.40pm to find out! Share your thoughts in the comments below about who you want to take home the trophy and be crowned the winner of Strictly Come Dancing 2016.

Don’t forget to tune into It Takes Two to catch up with all things Strictly, every weeknight with Zoe Ball on BBC Two.

One day left to master their moves before the Grand Final… will our couples rise to the challenge in training?