Looking at this exquisite couple is like staring into at the sun for too long; they’re dazzlingly hot in a way that can damage your retinas.  But we’ll keep doing it anyway!

Kicking things off in Week One, we saw Ben Cha-Cha his way into joint second from last with Vanessa and James. But, all his 'try'-ing paid off the following Saturday as he waltzed his way to a respectable 25 in Week Two.

Things generally seem to have been improving for Ben and Kristina since and a passionate Paso in Week Six saw them awarded their highest score yet of 32 but they stumbled slightly as they jumped, jived and wailed their way the following week to 26 points and joint fifth place on the leaderboard with Fiona and Anton.

Can they keep their game up and improve next week? Keep supporting Ben and Kristina and post your messages below. 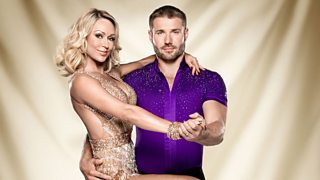