Dragon's Den star Deborah Meaden and Robin Windsor are Team DebWin. Despite her tough businesswoman persona, Deborah has shown her fun side since joining Strictly, and has formed a hilarious partnership with her NBF Robin.

In training, the couple look like they’re having far too much fun together, but this hasn’t stopped Deborah from impressing the judges during the live shows.

Week One saw them perform a fantastic Tango to ABBA’s ‘Money Money Money’, in the second week they did the Cha Cha Cha to Aretha Franklin’s ‘Respect’ which had Bruno exclaiming…’I loved that bubbly, feisty, frivolous personality’.

Week Three brought with it a marked improvement, with Deborah and Robin being awarded 28 for their delightful Quickstep.

If you're backing Team DebWin this year, leave your messages below. 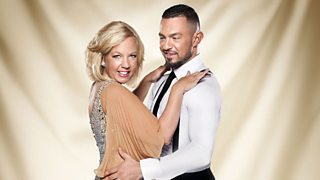