From the outside the pairing of gregarious, funny, warm, and dare we say cuddly, actor Mark Benton and frosty Lithuanian ice queen Iveta Lukosiute, looked to be a huge mis-match. BUT these two have not only been getting on like a house on fire – they’ve been setting the dance floor alight as well.

Mark may be ‘doing it for the big guys’ but he immediately showed that he’s light on his feet with a brilliant comical Tango to ‘Hernando’s Hideaway’ in Week One. Their Cha Cha in Week Four to MC Hammer's 'Can't Touch This' also proved to be particualrly memorable and in Week Five Mark showed us he wasn't just the funny man with a beautiful Waltz and a very respectable 28 points.

They survived the dance off against Team Hauerly Daveson in Week Seven after a Rumba that scored just 23 points from the Judges.

Leaderboard aside, it’s safe to say that Mark and Iveta are definitely having a laugh in the training room and their sense of fun shines through in their dances.

If you're backing Team Marketa this year, leave your messages below. 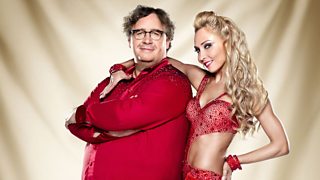