We reveal our biggest pro-dancer line-up ever! As a trio of outstanding dancers join the show

Today we are excited to announce our biggest pro-dancer line-up ever in the history of Strictly Come Dancing, as three world-class dancers join the show! They are, Italian Latin Champion Graziano Di Prima, Professional South African Latin Champion Johannes Radebe and four-time winner of the Italian Dance Championship Luba Mushtuk. 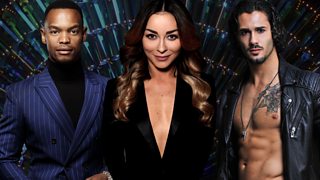 As announced earlier in the year, series one winner and 2017 Christmas champ Brendan Cole, will not be returning. A huge thank you goes to Brendan from all at Strictly for 15 amazing series. We wish him all the very best with his future projects.

Chloe Hewitt, who joined in 2016, will also be leaving this series. We wish her well.

Find out more about our new Strictly recruits...

Sicilian-born Graziano Di Prima, an Italian Latin Champion, has represented Belgium at the World Championships and made the top 24 at the Latin World Championships (under 21). For the past three years 24 year old Graziano has toured the world with the dance company Burn The Floor. He says: “This is my dream come true! I still can’t believe I will be one of the professional dancers on Strictly Come Dancing. I can’t wait to give all of myself on the dance floor!”

Johannes Radebe, 31, from South Africa is two-time Professional South African Latin Champion and three time South African Amateur Latin Champion. He is a dancer with the Afro Arimba Dance Company and has also been a professional dancer on Strictly Come Dancing South Africa for two seasons, both times reaching the final. He says: “Joining Strictly Come Dancing is one of the greatest achievements of my dancing career. It is such an honour to be chosen to be a part of an incredible cast and be part of one of the biggest shows that is celebrated worldwide. I cannot wait to get started and experience the magic with the UK!”

Russian-born Luba Mushtuk is four-time winner of the Italian Dance Championship and Italian Open Latin Show Dance champion. She was ranked 2nd in the European 10 Dance Championships and was a finalist in the Latin European Championship. 28 year old Luba has worked extensively with Broadway and West End show Burn The Floor, was part of the Strictly Come Dancing Live tour and has performed on both Giovanni Pernice’s and Kevin and Karen Clifton’s tours. Luba joined Strictly Come Dancing in 2016 as an assistant choreographer contributing to a number of group routines. She says: “Words cannot express how thrilled I am to do what I love most on the greatest show on earth! I am super excited and so thankful for this priceless opportunity. I can’t wait to get started as a professional dancer on Strictly... bring on the sparkle!”

Katie Piper is our first Strictly star of 2018!