You've just heard the names being revealed on It Takes Two and yes, it's true, Strictly Come Dancing will be more festive than ever this Christmas day with a super special lineup to rival all others gone before. 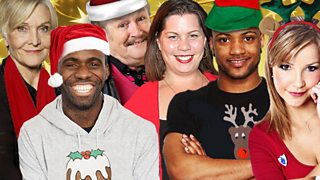 We can confirm the celebrities and pro dancers taking part in the Christmas Special 2012 are:

Not only will there be six new celebrities competing on the dancefloor, but we'll also see The Strictly Allstars - nine contestants from previous series' taking to the floor once again (are they crazy?!).

The spectacular Strictly Allstars will consist of;

And if all that wasn't enough, Rod Stewart will be bringing some festive cheer as he pops in to perform Let it Snow. Wow, with all these stars, we're really spoiling you!

Santa will deliver the Strictly Come Dancing Christmas special on Christmas day, BBC One and BBC One HD.

The History of Dance : Charleston