Ranvir and Giovanni leave Strictly in the Semi Final

Its the end of the road for Ranvir Singh and her Pro partner Giovanni Pernice, as they bow out of the competition just one week before the 2020 Grand Final.

The couple brought two very different routines to the dancefloor on Saturday night, performing a Waltz to Un Giorno Per Noi by Josh Groban and a Jive to Candyman by Christina Aguilera. But with the competition tougher than ever, the couple found themselves at the bottom of the leaderboard and - following the public vote - in their first ever Dance Off.

The pair faced Jamie Laing and Karen Hauer as they performed one of their routines again, choosing to dance their Waltz. But ultimately the Judges chose to save Jamie and Karen.

The vote was split down the middle with Craig Revel Horwood saving Jamie and Karen, and Motsi Mabuse opting to keep Ranvir and Giovanni in the run. But Head Judge Shirley decided Jamie and Karen deserved a spot in the Final, saying: "This is very difficult, because I’ve grown to love both couples. I’m getting quite emotional now. Musicality, determination, conviction from both teams, they just gave their all. But I just feel that one couple had a little more determination, a little bit more ‘I’m not leaving without that trophy’ and with that in mind I’m saving Jamie and Karen.” 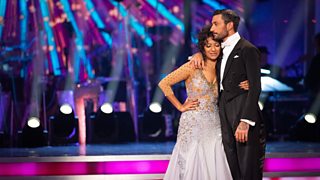 This meant Ranvir and Giovanni had to say their goodbyes, narrowly missing out on next week's Grand Final.

Speaking about her time on the show, Ranvir said: "There’s some really beautiful moments in there and so much more than I ever expected, and I’m sad not to be in the Final. But at the same time, I am glad that we’ve moved people to tears and the Argentine Tango was an amazing moment. We’ve had some really fantastic memorable moments and I know I couldn’t have got this far without you [Giovanni]."

Giovanni also had lovely words for Ranvir, saying: "I’m really hoping from this experience you just feel a better person, because you truly are an amazing person, inside and out. Yes, you’ve grown as a dancer, but more I hope you feel happier in your life because you deserve it.”

They've really delivered every week and we're so sad to see them go! But they will be back for one last time on Monday's It Takes Two at 6.30pm on BBC Two.

It's nearly time to meet our Finalists...

Songs and dances: The Final