Songs and dances: The Final 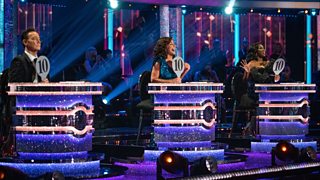 Can you believe it's almost the Strictly Final of 2020 already?!

Our four remaining couples are competing for the coveted Glitterball this week, so they've got to bring their A-game more than ever before. They'll be performing three routines on Saturday, including their own favourite from the series, a spectacular Showdance and a Judges' Pick. So let's reveal them all right now...

Showdance: The Show Must Go On by Queen

Judges' Pick: Quickstep to Talk To The Animals by Bobby Darin

Favourite dance: Quickstep to When You're Smiling by Andy Williams

Showdance: We Need A Little Christmas by Idina Menzel

Favourite dance: American Smooth to One (Singular Sensation) from A Chorus Line

Judges' Pick: Charleston to Zero To Hero from Hercules

We really are in for a treat this weekend! Which pair are you backing?

Join us in the Ballroom for our fab-u-lous Final this Saturday at 6pm on BBC One, and keep up with us on Instagram, Twitter and Facebook for all the excitement throughout the week.

Ranvir and Giovanni leave Strictly in the Semi Final

It's time for the Grand Final!