Keen golfer Sir Bruce Forsyth has exclusively revealed on The One Show that former international golf pro, Tony Jacklin, is the first male to join the class of Strictly 2013. He is set to join BBC broadcaster Vanessa Feltz in the line-up, who was announced on Radio 2 by Zoe Ball yesterday.

As the most successful Ryder Cup captain ever, Tony will be swapping the golf greens for the infamous Strictly dance floor.

Here’s an exclusive photo of Tony during his Strictly photoshoot. It’s our mission to get him in more sequins and ruffles as the series continues! 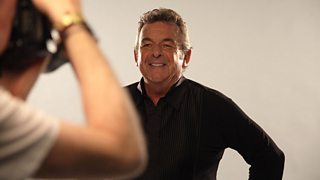 Live on The One Show, Tony told presenters Alex Jones and Chris Evans that he's "never done any sort of dancing. " When asked if he's started rehearsing yet, he said "We did the first dance today, the group thing. There's so much to remember! The moves are fine, but it's the order... and doing them together!"

Bruce Forsyth said that it was a "stroke of luck" to get Tony involved and that he'd be a "swing-dancing specialist"... see what he did there??

We’ll be announcing more Strictly contestants and news everyday between tomorrow and Monday when the full line up is announced on The One Show at 7pm.

Don’t forget that we’ll also have a behind the scenes Red Carpet Extravaganza available for you to watch on Red Button and iPlayer on Wednesday 4th September, less than 24 hours after the glittering event takes place.

The 20 minute programme will be presented by Strictly 2012 contestant Lisa Riley, who'll bring all the glitz and glamour of the Hollywood-style red carpet to life. Viewers will get to see all the celebrity contestants of 2013 interviewed for the first time as they begin their journey into a life of sequins and sambas this autumn.