We're dusting off our dancing shoes to bring you the news that three new professional dancers are joining our Strictly ranks ready for when we return in the Autumn. Russian-born Dancing With The Stars favourite Gleb Savchenko, 2012 Italian Champion Giovanni Pernice and eight-times South African Latin American Champion Otlile Mabuse. Our three new faces complete our sparkling sixteen alongside Strictly favourites who are returning to the show.

The line-up in full

Lousie Rainbow, Executive Producer says: “We are thrilled with our pro-dancer line up this year. Not only are some of the viewers’ favourites returning but we also have some exciting new dancers joining the Strictly family. I think it’s safe to say that this year’s Strictly will be as exciting and entertaining as always.”

On Iveta’s and Trent’s departures from the show she adds: “Iveta Lukosiute has been with us for three series and we would like to thank her for her wonderful contribution to the show and wish her the very best for the future. And huge thanks also to Trent Whiddon who danced so beautifully with Pixie last year.”

Iveta says: “I really enjoyed my experience on Strictly Come Dancing! I loved everything about the show, dancers, judges, BBC, celebrities, fans... all of it was a pleasure to be a part of this wonderful show! I always tried to do my very best to show off my celebrity and add as much as I could to the show. This year I will focus more on my dance school in New York City since I was away so much, however, I will be more than happy to stay involved with the show in the future.”

Trent adds: “I was very happy to be part of last season and very thankful for the opportunity”. 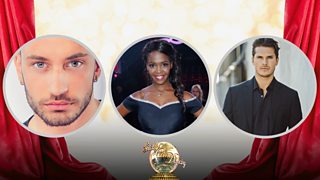 Otlile was born in Pretoria in South Africa and is currently competing in the German version of Strictly Come Dancing where she is performing with Daniel Kublbock, a German pop star. Otlile began dancing in South Africa as a young child along with her sister who is also a professional dancer and now a judge on the German show. Otlile moved to Germany to push herself as she was the 8 times South African Latin American Champion and wanted new challenges. Otlile studied Civil Engineering at University but ballroom dancing was always her true passion. Otlile has achieved many titles in her dancing career including World European Latin semi-finalist and World Cup Championship semi-finalist. On joining Strictly she says: “To finally see my dreams unfold before my eyes is such an unbelievable feeling. I'm so excited to meet the team and the other dancers”.

Giovanni was born in Sicily and decided from a young age that he wanted to take up dance lessons. At 14 years old he moved to Bologna to concentrate on dance and to be taught by some of the best teachers in the world. His greatest achievement is the day he won the Italian Championships in 2012. He has the date tattooed on his wrist, along with ‘Nato per vincere’ meaning ‘Born To Win’ written on his arm. His favourite dance style is Jive as he feels it reflects his cheeky character. He is very much looking forward to moving to the UK and joining the show which has been a dream of his for many years. He says: “I have loved watching Strictly Come Dancing and I can’t wait to be part of the show”.

Russian born Gleb has been dancing since he was eight years old when he started lessons in his home town of Moscow. Gleb has travelled the world competing and performing and now at the age of 31, he is back in Russia partnered with Adelina Sotnikova, an Olympic Gold ice skater in the Russian version of Strictly Come Dancing. Gleb also competed in Dancing With The Stars in America where he was paired with Lisa Vanderpump. Some of Gleb’s greatest achievements include coming 10th in the World and 1st in Rising Stars. Gleb has also modelled for numerous brands and has danced with Jennifer Lopez in a commercial for L’Oreal . Gleb specialises in Latin and is passionate about joining Strictly. He says: “I can’t wait to join the show – I’m really excited to join such a fabulous brand and dance like the whole world is watching”.

Let us know what you think of our line-up below.

The People's Strictly takes to the dancefloor!

Jeremy Vine revealed as our first Strictly celebrity of 2015!