It's not a case of 'maybe baby' with Ashley because in Week Two his wife gave birth to their second son, adding just one more tiny, adorable, squishy little thing onto his plate... on top of filming Hollyoaks for 12 hours a day and rehearsing with Ola until midnight. Still, Ashley’s taking it all in his well-choreographed stride and is loving the whole Strictly experience.

The Judges seem rather keen too, awarding Ashley 25 for his Cha Cha Cha, 32 for his American Smooth and 31 for his Samba.

Week Six saw them dance an "aggressive, dark and mysterious" Tango which earned them a very respectable 33 points before they went on to top this with their highest score yet of 35 thanks to a Quickstep that caused Bruno to exclaim "sparks are flying!"

We’re still waiting for them to do a dance to Boney M's "Daddy Cool" though!

With the lack of sleep and long hours, Ashley and Ola need your support! Keep leaving your messages/thoughts/opinions/ on this blog in the comments below. 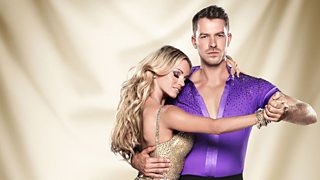