Donetsk gears up for semi-final showdown

I am back in Donetsk for Wednesday's semi-final metting between Spain and Portugal.

Donetsk is the mining and industrial heartland of Eastern Ukraine. In Soviet times it was a centre for the manufacture of military hardware and as such was closed to foreign travellers.

I first visited Donetsk in 2000 with Arsenal, for a match against a new emerging force in Ukrainian football - the previously little-known Shakhtar.

At that time, the region still felt as far removed from Western Europe as is possible. There were two hotels in Donetsk, one was terrible and the other was worse. Arsenal brought their own food, bedding, toilet roll and cleaners; the rest of us had to make do.

We were warmly welcomed, though. I remember travelling through dimly-lit streets to Shakhtar's stadium for training the night before the match and having an orange and black Shakhtar scarf thrust into my hand by a supporter. He just wanted the name of his club to be spread abroad. He's certainly had his wish, with a 2009 Uefa Cup victory and Champions League football almost guaranteed every year. 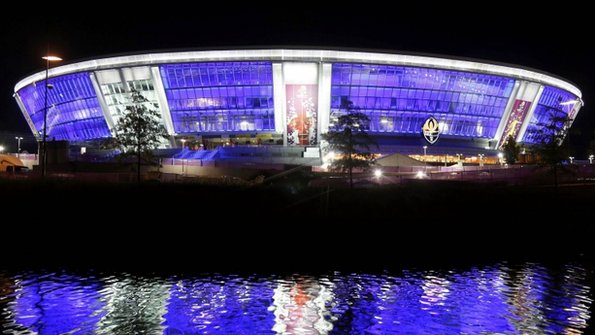 The Donbass Arena in Donetsk was paid for by Ukraine's richest man, Rinat Akhmetov. Photo: Reuters

Twelve years on since my first visit and Donetsk has changed enormously, although it would still struggle to be described as a tourist trap.

Back in 2000, Arsenal had already qualified for the next phase of the Champions League and their side, which included my BBC co-commentator Martin Keown, lost 3-0 to Shakhtar.

On Monday I walked past Lenin Square, down Pushkin Boulevard and across the bridge that crosses First City Pond (actually a big lake) to the old stadium. It is a sorry sight, locked and crumbling, a relic of Donetsk and Shakhtar's past.

A couple of miles away at the other end of town the extraordinary Donbass Arena is being prepared for the semi-final between Spain and Portugal. It was the first stadium in Eastern Europe to be given Uefa elite status, and boy does it deserve the accolade. It is so good that frankly it makes Arsenal's Emirates Stadium look a little dated.

There were long queues forming at the ticket collection windows this morning for a contest being billed as between Spain, one of the best football teams of all time, and Cristiano Ronaldo, one of the best players of this or of any generation. The sense of occasion is palpable, as is the sense that Donetsk, situated right on the eastern fringes of Europe, has arrived on European football's centre stage.