Match of the Day on the last day of the season is always a little bit different.

Last season's relegation decider was one of the most memorable programmes of recent years as four crucial games were cut together to reflect every twist and turn as it happened.

I was at Stoke against Wigan that day, getting news from the other relevant matches fed into my ear as the game unfolded. Wigan's scenario was that they had to win and you will recall that they did exactly that. Blackburn and Wolves also clung to safety while Blackpool and Birmingham bit the dust around them.

Every cruel surge of hope and flood of despair was brilliantly reflected on the programme as it flipped from venue to venue.

The swings and roundabouts of that dramatic final day were a bit of a test for my maths. In between commentating on the excitement at Stoke, I was scribbling on my copy of the league table updating goal difference and goals scored to make absolutely sure that I knew exactly what was what. The last thing I wanted to do was to holler "Wigan are 10 minutes from safety!" just as the axe was falling.

At least if I had got my maths wrong the only person to suffer would have been me. Manchester City fans may be intent on seeing their side clinch the title this Sunday, but many will recall when one such horrible error helped to send them down. 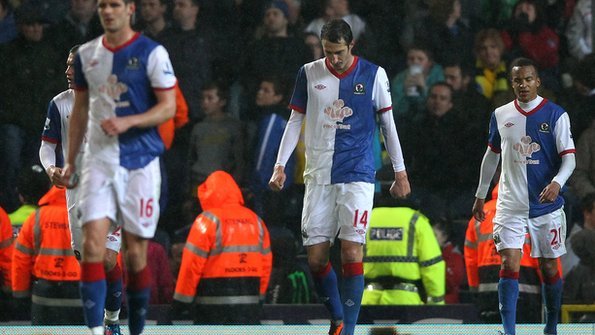 The Blackburn Rovers players are now down and out. Photo: Getty

Back in 1996, City were drawing 2-2 with Liverpool at Maine Road when manager Alan Ball was incorrectly informed that a draw would be enough to keep them up. He duly instructed his players to time waste - it was a big mistake and City went down.

This season I will be at the Stadium of Light, where Manchester United will be hoping for similar last day City buffoonery. City fans with long memories will be certain that if any club can snatch defeat from the jaws of victory then it is them.

It is more than likely that the City and United games will be intercut on Match of the Day, and then I can assume in my commentary that the viewer will be as aware of events in the other game as I am. There are, after all, still people who do not like to hear the football results before the famous MOTD theme music starts up, though how they manage it I am not sure.

The running order of games on Sunday's programme is slightly complicated by the fact the City v QPR game also goes a long way to deciding the last relegation issue; a point for QPR might help hand the title to United but would also relegate Bolton - barring a nine goal win for Owen Coyle's side at Stoke.

If City win then our man there, Guy Mowbray, will have to keep his powder dry over what that means for QPR's chances of survival until it's confirmed by Jonathan Pearce's commentary from the Britannia.

Then there is the race for third and fourth.....

It's probably the most enjoyable programme of the season to work on and hopefully one of the best to watch. The only problem is that next weekend doing normal stuff without a game to commentate on will be strange indeed. Roll on the Euros.