Kenny's cup-winning Reds at a crossroads

If at the beginning of this first full season of the second coming of Kenny Dalglish at Anfield you had asked Liverpool fans whether they would take a trophy and European qualification, I fancy most would have reckoned on that being a very decent outcome.

Liverpool achieved both those goals in one afternoon by winning the Carling Cup last Sunday.

Now, what will the rest of the season hold?

In some ways, Liverpool are at a crossroads. The FA Cup is a very enticing prospect, with a home quarter final against Stoke City, no Manchester United, Manchester City or Arsenal in their way - and no guarantee that Chelsea will make the last eight either.

But a return to the Champions League would be the most significant achievement of all.

This campaign is beginning to bear some real similarities with the 2001 season when Liverpool used the momentum of cup wins, which came thick and fast, to squeeze qualification for the Champions League for the first time under its new name.

And, just as then, their push started with a League Cup final win on penalties against Championship opposition......for Birmingham City in 2001, read Cardiff City now. 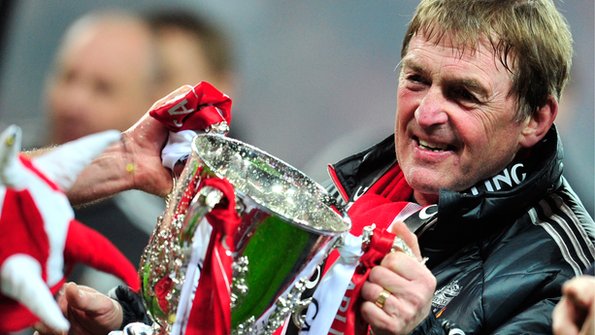 In those days, only three English teams qualified for the Champions League. But, once the League Cup had been won, Liverpool successfully juggled Uefa Cup and FA Cup quarter-finals, semi-finals and finals with their last dozen league games to make up ground on the top teams and pip Leeds United to third place on the last day of the season.

This time have Liverpool have no European fixtures to contend with, but more ground to make up in the league.

They are seventh, seven points behind both Arsenal and Chelsea and four behind Newcastle but with a game in hand (against Everton) on them all.

Maybe the freedom and confidence of a first trophy since 2006 will allow them to take off the shackles and turn draws into wins, especially at home?

After all, if they miss out on the Champions League this time, future qualification is only likely to get harder for Liverpool. Chelsea and Arsenal are vulnerable at the moment in a way they may not be next season. Neither have found any consistent form and both may strengthen considerably in the summer.

Certainly Chelsea have a spending power which Liverpool could not live with and, who knows, manager Arsene Wenger may even take the padlocks off the Arsenal purse strings.

It's hard to gauge which way Spurs will go if Harry Redknapp leaves, but they will obviously be a force, while the two Manchester clubs would seem to have places at the top table more or less guaranteed and Newcastle will be hoping that they can build on their considerable achievements so far this season.

There is also the possibility that any more poor years in the Champions League could see the Premier League's quota cut back to three clubs.

If that were to happen than Liverpool's hopes of being on the inside of the gravy train looking out rather than the outside looking in would look slimmer again. That's why I say Liverpool are at a crossroads.

For Kenny's men, the League Cup was a start and the FA Cup would be fantastic, but the remaining 13 league games are crucial. They start with Arsenal coming to Anfield on Saturday and, if Liverpool are to close that seven-point gap, that's almost a must-win match.