It's turning into a difficult season for Aston Villa's players, management, chairman and supporters.

The Villans have taken just 28 points from 24 games this season and sit 13th in the Premier League table.

They have not won at home since early November and attendances at Villa Park are down around 10 per cent on last season.

Those same fans who were horrified when chairman Randy Lerner appointed Alex McLeish - the former manager of bitter rivals Birmingham City - have been online this week whipping up support for a planned protest against the Scotsman before their game against Manchester City on Sunday.

A statement posted on the Vital Villa (VV) fans' website claims the team's current run of results is "relegation form."

To add to their conviction that McLeish is the wrong man for the job, they are pointing to his spat with Charles N'Zogbia and the Frenchman's much reported tweet as evidence of player unrest. 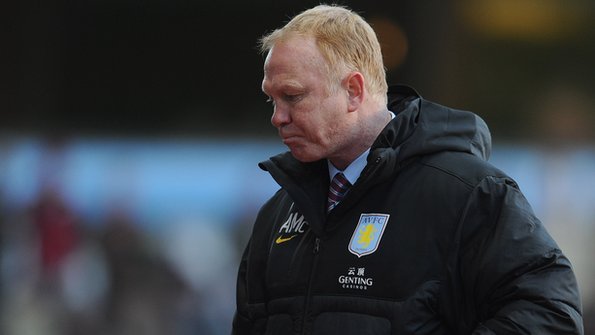 Villa have taken just 28 points from 24 games this season under McLeish. Photo: Getty

The £10m signing tweeted he was not happy playing football for the first time in his life - a post which was swiftly removed.

I cannot tell you what they mood really is in that Villa dressing room, but I can tell you that employing N'Zogbia has sometimes been a challenge for other clubs as well.

His undoubted potential might not have been reached when he was a teenager at French club Le Havre, because of his affiliation with bad influences, while he left Newcastle for Wigan when Joe Kinnear left him out of the team and upset him by mispronouncing his name as "insomnia".

The fans are hankering for a return of the good old days at Villa, not only the fantastic side of the early 80s when they won the First Division and European Cup in successive seasons, but also looking on enviously at the magic being spun by their former boss Martin O'Neill at Sunderland.

Ah yes, those were the days - when, in their first 24 games under O'Neill, they had 29 points and sat 14th in the table.

I'm not saying that everything is fantastic at Villa Park, but I don't think the manager is the major problem. O'Neill, given time, financial support and the goodwill of the fans, achieved terrific things with three sixth-place finishes, a Wembley final and a taste of Europe.

However, could it be that O'Neill resigned five days before the start of the 2010/11 season because he could see which way the club was going? In simple terms the money has largely dried up.

Yes, they signed Darren Bent last January for a fee which could eventually rise to £24m - but at the time Villa were 17th and in serious danger of being relegated.

If only Lerner had been willing to invest to attempt a step up rather than to fend off a step down, then perhaps O'Neill would still be in charge?

Lerner is entitled to spend as much or as little as he pleases, but I do think it is time for him to put his aside his desire for just about the lowest profile in football and explain what his long-term strategy for the club is.

As things stand, Villa look destined to be a mid-table outfit for evermore.

McLeish is probably no happier with that than the Villa faithful are; but surely he deserves to be judged against the record of other Villa managers only when he is given the same opportunities?