I'll be at Anfield this weekend for Queens Park Rangers' first visit there since 1995.

Go back another four years and you'll find Rangers' only ever win at Liverpool. It was something of a landmark for them, and one for me too as it was my first broadcast commentary.

I had been working at Capital Radio in London for only a few months and had been thoroughly enjoying my Saturdays in Division Three covering Brentford and Fulham, so it was quite a shock when I was told that I was to be sent to Anfield to provide match updates on the Liverpool game against Rangers.

As a young kid on the Wirral I had been lucky enough to watch Tranmere Rovers play on Friday nights and, occasionally, Liverpool on a Saturday too. 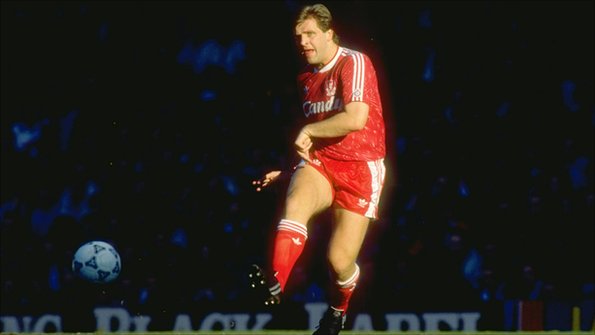 Liverpool, on the back of a 7-1 win against Derby at the Baseball Ground, took on QPR at home (1991) and lost 3-1 with Jan Molby (centre) scoring their only goal from the penalty spot. Photo: Getty Images

I had waited outside the entrance to Anfield's main stand many times in the hope of getting autographs.

You can imagine that I was pretty wide-eyed as I found myself walking through that same entrance.

I headed up the red-carpeted stairs past the shining glass cases which display some of the minor silverware not important enough to make it into Liverpool's main trophy room.

Walking past the boardroom I made my way outside to the press box overlooking the halfway line.

My seat was on the right-hand end of the row, with Liverpool fans sitting no more than two feet away on the other side of a low wall.

I knew I would have to be careful about where I put the effects microphone we used to pick up the noise of the crowd or there was every chance that those fans would get as much airtime as me.

I was probably looking on a bit wistfully as the crowd sang "You'll Never Walk Alone", having to remind myself that I was there for a London audience. It would be key not to sound too scouse when relaying news of any goals back to London.

Capital Radio had obviously sent me to Anfield expecting a run-of-the-mill home win, otherwise they would have sent one of their more senior reporters. It was a fair assumption - Rangers had never won there in their history.

That was about to change. Les Ferdinand and Roy Wegerle scored to put Rangers 2-0 up at half time. This was turning out to be the big story of the afternoon.

Capital Radio's main commentary match that afternoon was Arsenal's game at Derby, where Alan Smith had given the Gunners a half-time lead.

From the studios in London, our senior producer Pete Simmons warned me to be ready to do lots of updates in the second half to keep Rangers' fans in touch as much as possible.

Liverpool continued to struggle against a QPR side sensing a win which could move them clear of the relegation zone.

Then the referee gave a penalty to Liverpool for handball. I pressed the buzzer on my broadcasting kit which alerted Pete to anything newsworthy.

From Derby, Jonathan Pearce cued me to commentate on the penalty. I kept my composure and so did Jan Molby to score - my first live commentary on a goal. I handed back to Jonathan and took a deep breath.

The game was getting really tense and I would now be a big part of the rest of our programme that afternoon. It was a long way from doing the odd 20-second update from Fulham or Brentford.

At Derby, Jonathan described the action as Alan Smith scored a second for Arsenal to put them 2-0 up. Meanwhile at Anfield, Rangers deservedly got a third goal when Clive Wilson scored for them at the Kop end.

Just to my right, the Liverpool fans had almost had enough. They were practically screaming at their own side's incompetence and my microphone was picking up most of what they had to say.

In my headphones I heard Pete call: "Jonathan's game is dead, I think we should take the last 10 minutes of your game live. Are you up for doing some commentary?"

Looking back, I wonder whether if I had said no, my career would have taken a different course. I didn't have to think twice before I said yes.

For years I had spent every Saturday afternoon and many midweek nights listening to football commentary on the radio, now the people back in London would be listening to me.

The buzz of doing that 10 minutes was amazing. Liverpool were pouring forward desperately, but it was Rangers who came closest to scoring, Bradley Allen's shot beating the Liverpool keeper Mike Hooper but hitting the side-netting.

For a split second I thought it was in: "Allen! Yes, it's four! No! Side-netting!" I must have been doing well with the "London audience, not too scouse" thing.

As the Liverpool keeper took the resulting goal kick, a home fan to my right turned to glare in my direction and shouted straight into the effects microphone so that I and our audience back in London could hear loud and clear: "Get stuffed you cockney idiot!" - or words to that effect!