The hidden side of commentary

There are two things which seem to surprise people about being a Match of the Day commentator more than anything else.

The first is that we are actually at all the games you watch on a Saturday and Sunday night; the second is that our commentary positions are not sumptuous, warm converted executive boxes with a steady supply of finger food and coffee.

The reality is they are often rusty old gantries hanging from the roof of a stand with everything covered in a thick layer of dust and grime pre-dating John Motson's first sheepskin.

When I first joined the TV team back in 2001, not every game was covered as it is now. The games which looked likely to provide the biggest stories were selected to have a commentator on site, while one would be on duty at Television Centre to dub commentary onto whichever game proved to be the best of the rest, and the remaining games and goals were covered in a round-up.

When the BBC won the Match of the Day rights back from ITV in 2003 the format changed, and since then every game featured on a Saturday or Sunday has had a BBC TV commentator in attendance.

Match of the Day commentary positions vary according to the age of the stadium but, mercifully, they are never indoors as you will often find abroad. There is nothing worse than trying to capture the atmosphere of an occasion when you are stuck behind thick glass in a booth so well sound-proofed that you may as well not be in the ground.

I remember going to Benfica's old Estadio da Luz before it was rebuilt. It was one of the world's greatest stadiums, but the commentary position for Radio 5 live's coverage of a qualifier between Portugal and Ireland came from the very back of the top tier in a brick-built hut with a reinforced glass window at the front. I couldn't hear a murmur of the noise from the 80,000 crowd and may as well have been watching on a giant TV screen hanging from a hot-air balloon.

The same was true in the Parc des Princes in Paris for Arsenal's Cup Winners' Cup final against Real Zaragoza, at Dynamo Kiev's old Olympic Stadium and, for some of the worst commentary positions, you just have to go to the Nou Camp in Barcelona. Whatever the weather, I think every commentator I know would agree - put me outside. 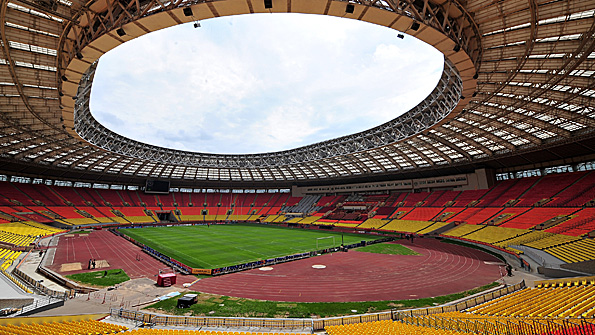 The toughest position I have ever had to work from was in Moscow when England lost to Russia in the Luzhniki Stadium in 2007.

Going to the ground the day before the game to watch Russia's training session we discovered that our position was somewhere behind the corner flag built above the back row of seats right at the top of the huge stand. When you consider the stadium has a gap between the pitch and the running track and then another bigger gap between the track and the front row of seats, I reckon our perch from the very back must have been getting on for 150m from the goal away to our left-hand side. I could tell it would be tough to identify an English goalscorer in any scrambled melee from that distance, let alone a Russian.

What made my mood worse was that Sky TV had managed to get themselves a perfect position right over the halfway line about midway up the stand. I could almost hear what people back in the office would be saying: "How come Martin Tyler called the goal so well on Sky while Wilson was making a prat of himself?"

So it was not only the fear of watching Steve McClaren's team suffer a damaging defeat that was bothering me as I took my place with Mark Lawrenson before kick-off.

The adrenalin was pumping, England could not afford to lose and Russia had to win. I was desperate not to make a mess of such a big game.

The atmosphere as I started commentating on the teams coming out of the tunnel was one of the best I have ever experienced. Smoke, flares, and ear-splitting noise - fantastic. I was just praying that my eyesight would not let me down as I peered through the smoke at the players lining up for the anthems in the far distance.

Then they started unfurling the flag. It started just below our feet in the very back row of the stand filled with thousands of Russian supporters. It was like the longest roll of carpet you have ever seen, stretching from one end of the stadium all the way to the other and was longer than the length of the pitch.

Over the heads of the fans it slowly spread. Down and down it went, revealing the Russian flag with a giant snarling bear in the centre.

Now I like Martin Tyler and have the utmost respect for him as a commentator, but I confess I could not smother my smile as the flag inexorably made its way right over the top of his head and down to the track below. Commentating from underneath Moscow's largest flag - now that's a challenge!