The curse of the commentator

Sunday's game between Chelsea and Liverpool at Stamford Bridge threw up one of those occasional moments a commentator absolutely dreads.

It was during the first half when Chelsea were awarded a free-kick outside the Liverpool penalty area. Didier Drogba stepped up to take it and his shot whistled a couple of inches past the post, hit the stanchion holding the net in place and then ricocheted to the left to glide along the back of the net from behind the goal.

For the commentators sitting high in the East Stand, it looked like it was nestling in the back of the net from inside the post. We were not alone. The majority of the Chelsea fans not sitting exactly in line with the free-kick were celebrating. It was a second or two before I realised it was not a goal.

Commentators are a pretty paranoid lot so at half-time I, along with some colleagues from TV channels all over the world, were asking each other who had called it as a goal and who had not. Pretty much everybody had made the same mistake, which made all of us feel a lot better.

Well, this takes me back to my last blog when I was describing that one of the things which seems to genuinely surprise some people is that the Match of the Day commentators actually report live on the game from the ground as events unfold in front of them. 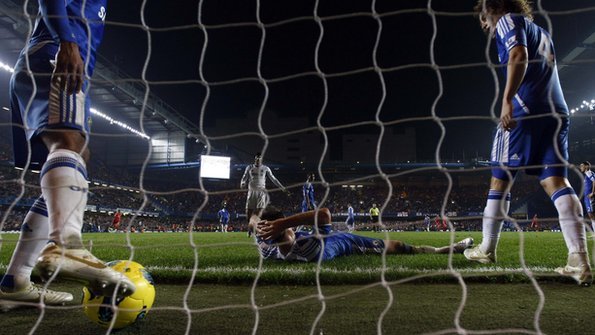 One thing not in doubt was that Glen Johnson's strike did hit the back of the net. Photo: Reuters

Some people were not convinced, so allow me to revisit a couple of the replies to that blog:

"What clearly is not a myth is that the commentary heard on Match of the Day is recorded after the game and therefore is with the benefit of hindsight."

"So what if the BBC sends commentators to every game? They just do the interviews. The commentary is done afterwards - at the start of every single game the commentator name-checks some player who will score or get sent off, the same with when a sub comes on. None of them are particularly good at feigning surprise either."

But of course you can never win, someone else posted this:

"This article contains very little insight for anyone sad enough to care about what goes on behind the scenes at MOTD. And anyway, who actually thought the commentators didn't go to these games?"

Well, some people do take a lot of convincing; but just maybe my floundering to work out whether or not Drogba's free-kick was a goal or not (and then furiously talking myself out of the hole I had just dug myself into) will convince the conspiracy theorists that Match of the Day commentators are actually describing the action as it happens from the ground where it happens?

As the old footie song goes: "And now you're gonna believe us ..."

Then again, perhaps I was just double bluffing and actually deliberately made the mistake so it sounded as though the commentary was done at the time, rather than from the warmth of some luxurious studio long after the game finished?

Seriously, though, I do read the comments and appreciate (most of) them - good or bad!