For a man who must have been gasping for a cigarette and who told me he was tired before he even sat down, Carlo Ancelotti was a charming interviewee on Friday afternoon.

It was the first time I had interviewed the Italian away from the Match of the Day post-match interview room at Stamford Bridge.

How long you wait for a manager to emerge to meet the cameras is often dependent on the result; but Ancelotti is always prompt. Once his first priority, the post-match fag, has been dealt with he is usually straight out for the cameras.

Our venue on Friday was Chelsea's training ground in leafy Cobham, and the Chelsea boss had just talked brightly thorough a half hour press conference for the TV news cameras, the daily papers and then a brief closed session with the Sunday scribes before he was brought the short distance to our interview room.

"I am really tired today," he said. "Maybe we can just do one minute, eh?" I was pleased to see that he was grinning as he said this. The editor of Football Focus and I had discussed a pretty wide range of questions, I reckoned if we got Ancelotti in a good mood we might get through half of them - if he was in a bad mood we'd hardly get started.

"I am pretty tired myself," I said, "three kids do that."

"Ah, you can never get tired of your children!" he replied. "So this is for BBC One, yes? Lots of people watching! Like Rai Uno - only maybe better?"

As the lights were being adjusted and microphones switched on I asked what sort of wine he would have ready for Sir Alex after the game. He wasn't sure what was in his office at Stamford Bridge but suggested he might find a bottle of Brunello di Montalcino, a particularly lovely Tuscan red. 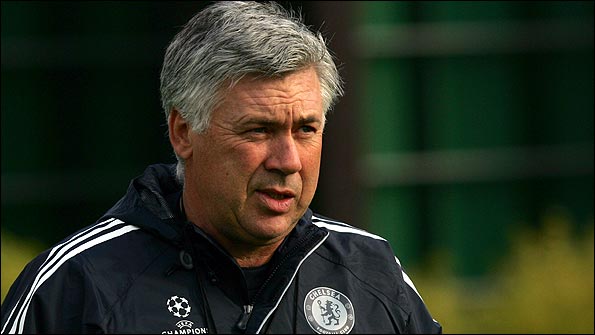 Ancelotti joined Chelsea in the summer

Then we were off. He spoke enthusiastically about how his squad seem to enjoy each other's company off the pitch as well as on it, a unity which has not always been the case in recent seasons.

I wondered if it would be possible for a man to be in charge of a club in Italy as long as Ferguson has been at Old Trafford. He laughed saying his eight years at Milan were a miracle, more than 20 years - impossible.

He raved about Wayne Rooney and how unusual it is to find a player so effective as creator and finisher. He loves the technique of Torres, but given the choice if building a fantasy team would go for Drogba every time.

We had been chatting for nearly 10 minutes and it was still going well - a good time to move the discussion on.

In an interview with the Italian press earlier this season, Ancelotti stated that the Premier League manager he respected most was Rafa Benitez - not something he was going to repeat 48 hours before facing Ferguson.

"I respect all managers the same" - a reply which got a nod of approval from Chelsea's head of press positioned just off camera.

"What about the World Cup?" I asked. "How will Fabio do with England?"

Ancelotti had played under Capello at Milan in 1991. "His record speaks for itself. But beware, it is very difficult to for a European country to win in Africa. I hope this time is different for Fabio and also for Italy but this will be very difficult."

"What about Trapattoni for Ireland against France?"

And with that warning for Malouda and co we had finished our allotted time.