It was a run-of-the-mill conversation with a friend in a pub. The kind of conversation you might have any night of the week - the kind that might change your life.

I had just bought my ticket for the 1989 FA Cup semi-final, a ticket for the Leppings Lane end. I had been to Hillsborough enough times to know that the view from this sunken terrace was of railings and boots almost at eye-level.

My friend Tony, a Manchester United fan, sympathised over a pint and told me that he had found a way to the open segment of terracing over the corner flag. "Less atmosphere, but if you want to actually get a decent view of the game it might be worth checking out. Just get through the turnstile and head left."

At about two o'clock on 15 April, I made my way into Hillsborough and was confronted by the low-ceilinged tunnel that led to the central terracing behind the goal - already looking full. I headed left.

This Saturday, Football Focus will be live at both Anfield and Hillsborough to mark the 20th anniversary of the disaster at Sheffield Wednesday's ground - a disaster which claimed 96 lives and which changed British football forever. 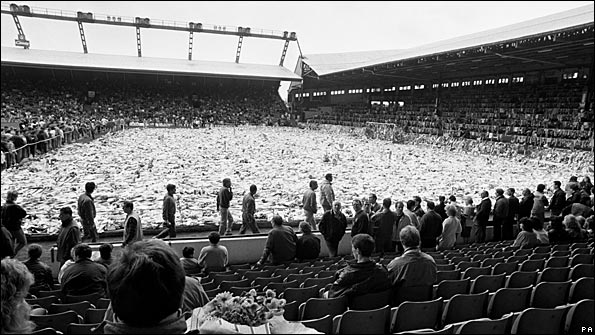 As part of the programme, I was asked to return to Hillsborough to retrace my steps that day. I had some misgivings about taking part.

Firstly, I felt my story was insignificant compared to that of so many others - I'd been safe throughout and didn't know anyone who died. Secondly, although I had been back to Hillsborough as a commentator, I hadn't stood on the Leppings Lane in the 20 years that have passed. I expected it to be difficult. It was.

The turnstiles are still there, the tunnel is still there. Everything about the place resonates, everything so familiar. Just being there induced a feeling of nausea in the pit of my stomach.

For the purposes of the camera, I went through the turnstile and was confronted by that low ceilinged tunnel - empty. Again I headed left for the terracing that had been my vantage point on that awful afternoon.

For 96 people who paused at the tunnel and headed straight on, there would be no chance of safety. No chance to step away from the seemingly trivial decision they had just made. No way to escape from the cage behind the Hillsborough goal.

I was 21 in April 1989 - older than many of those who died. In the 20 years since, I have been blessed with a happy marriage, three children and a fulfilling career. What might the 96 have done in that time? What love affairs have never been, what friendships never forged, what children never conceived?

The game has changed, and some say not completely for the better. But if you are lucky enough to be able to take your children to a match and sit in safety; to be treated with respect by those who police our grounds and to get home again without being crushed or scared, give those 96 a thought.

Honour, for a moment, those whose deaths made it happen.