It's snowing hard in Denmark's capital, the pavements are treacherous and the fountains frozen.

But surely Manchester City will not fall on their backsides here against FC Copenhagen in Thursday night's Uefa Cup match as easily as an unwieldy Englishman in unsuitable shoes?

The Danish football league has been in hibernation since their winter break began in mid-December, and it will not restart for another fortnight; but these are still heady days for the Danes.

It's been five seasons since any of their sides has progressed beyond Christmas in any European competition.

Now they have two representatives in the last 32 of the Uefa Cup - and one of them has virtually guaranteed a place in the final 16 already.

That's because Aalborg thrashed Deportivo La Coruna 3-0 in the first leg of their tie on Wednesday night, a result that must go down as one of the biggest upsets in this season's competition.

It's also a warning to Manchester City that, whilst this game comes in the Danish league's downtime, Copenhagen cannot be taken lightly. 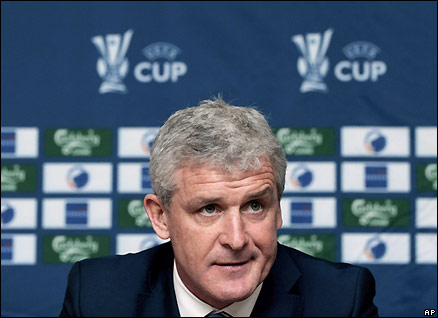 To add to the spice, the winners of the Aalborg v Deportivo contest will play either FC Copenhagen or Manchester City in the next round.

FC Copenhagen beat Manchester United and Celtic in their Parken Stadium only two years ago in the Champions League and are not accustomed to home defeats - only one in 11 months.

They are captained by Ulrik Laursen, who played for Celtic in the Uefa Cup final against FC Porto, and possess Cesar Santin, a Brazilian striker with a goalscoring record that commands respect.

Jesper Gronkjaer, the former Chelsea winger, is likely to be a substitute as he continues his comeback from a lengthy injury.

Thankfully for City, Libor Sionko, a dangerous winger who had an impressive Euro 2008 with the Czech Republic and who used to play for Rangers, is ill and will not play.

As for City, well they have been terrible away from home for months in the Premier League.

At Portsmouth last Saturday, the patience of Mark Hughes finally seemed to snap, with the manager as critical of his players as he has ever been.

The Uefa Cup is now their only chance for glory this season - and maybe Hughes' best chance of keeping the club's new owners on his side.

That's no doubt why they have brought all their big guns for this game.

At training on Wednesday night, Robinho was the focus of every camera lens. No surprise there -and City will hope for no surprises later either.