Broadcasting revolution of the digital Olympics

So the party's over, but the clean-up goes on.

While the past few weeks of the Olympics have been incredibly special, the work doesn't let up for BBC Sport. Alongside the huge network TV viewing figures we have seen unprecedented audience numbers for our digital services - and the challenge now is how we build on what we have seen in London for our week-in, week-out online sports coverage.

Big sporting events have traditionally been the catalyst for change in broadcasting - from the advent of colour TV to the introduction of HD - and I'd like to think what we have seen during London 2012 will have a bearing on how sport is covered in the future.

So we're already planning our next steps, such as:

• Enhancing our mobile offering, including the introduction of a BBC Sport app for smartphones;
• Taking some time to develop online video for live sport, following the success of London 2012; and
• Building a genuine, effective 'connected TV' service - ultimately to replace the red button, which has served us well in the past, but which is due to be scaled back in the coming months - and learning the lessons from the special 24 channels we had during the Olympics.

When we began our digital Olympics project, back in 2005 after London won the right to stage the Games, we came up with a phrase to describe our ambition. We wanted the 2012 Olympics to do for digital media what the Coronation had done for TV. In other words, to be the moment when it moved from the preserve of 'early adopters' (I'm not sure they were called that back in 1953) into the mainstream.

The reason we felt optimistic was down to the timing. From a digital perspective we were lucky that the BBC got to broadcast a home Olympics in 2012. If the Games had come to the UK in 2008 it would have been slightly too early, the technology and audience behaviour wasn't quite ready back then. Similarly if it had been in 2016, the moment would probably have passed. As it was, 2012 felt perfect: it was when the UK was due to switch off analogue TV and move to a fully digital landscape. It looked like being the 'sweet-spot' where technology and audience uptake were set to converge.

Much has changed in the intervening seven years, of course. Back in 2005 there were no tablets. Mobiles, for the vast majority of people, were just for making calls and texting. Only around half of UK households had digital TV. Social media was in its infancy - Facebook was only starting to pick up momentum; Twitter didn't even exist.

By 2012 viewers were ready for a new type of sports coverage - and, crucially, more of us have the kit and access to the signal we needed to enjoy the full Olympic experience.

That comparison with the Coronation has served as useful journalistic shorthand: a reminder to all of us at the BBC that public broadcasters have a duty to deliver big national events on behalf of the whole population. It's too early of course to tell whether we have witnessed something as seismic as the original surge in TV viewing back in 1953. But it does feel that we have seen significant change over the past few weeks.

London 2012 has proved to be a spur for a new type of media consumption: fully connected at all times, on-demand and on-the-go. The statistics are pretty bold, with 39 million UK browsers of BBC Sport, around a third of whom were accessing us on mobile devices.

But the anecdotal evidence is just as powerful. I have heard tales of TV viewers in their 90s using the Red Button for the first time, such was the pull of the sport on offer. I watched in amazement as a whole carriage on a train crowded round three different mobile screens to see Usain Bolt win his 200m gold. And you are reminded that this is now part of the national conversation when even the fabled front page of Private Eye is referencing the Red Button, This then genuinely did feel mainstream.

The key mission for our coverage was that you would 'never miss a moment' - built around offering every sport as it happened; a total of 2,500 hours of video in up to 24 different video streams at any one time. Across the 17 days of the Games, some 24m viewers watched at least 15 minutes of our Red Button service - and what was particularly gratifying is that all the different sports proved to be a draw for the audience, with each of those 24 'channels' receiving at least 100,000 viewers at some point.

Here are the peak audiences for each of the top 20 sports on Red Button (excluding Freeview numbers): 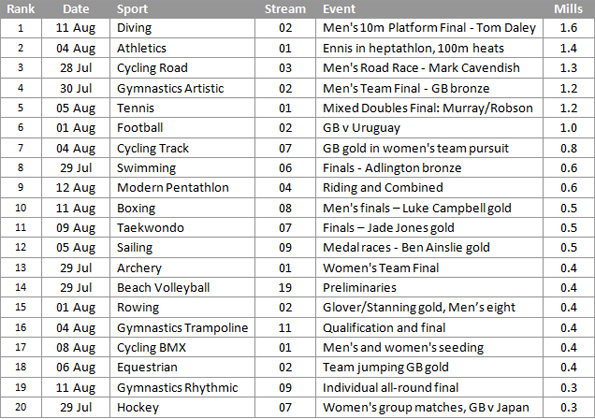 Beyond the phenomenal surge in multi-event viewing there have been other developments in sports coverage that we're tracking.

We are continuing to see the rise of live blogging or, as we prefer to call it at BBC Sport, live text commentary. These pages were the most popular on our London 2012 site - the classic one-stop shop where our journalists could capture all the stories from the panoply of Olympic sports. Essentially they represent a new form of story-telling: dynamic, bite-sized and interactive, with audience comments at the heart of them. They are the bedrock of our coverage of football, cricket and other big sports and we are always looking to take them to another level.

Then there is social media. This was the Olympics where Twitter made a huge impact.

As well as being the place where Olympians interacted with their armies of fans, Twitter has established itself, in pretty short order, as a key element of the journalist's armoury. We use it as an additional way for our reporters to get news and comment out there quickly - and to monitor stories from elsewhere.

BBC Sport used Twitter extensively during the Games, from taking photos of police officers mimicking Usain Bolt's trademark pose to sparking 4,000 retweets from Dutch fans after we linked their thrashing of Team GB's hockey team to their earlier dressage defeat.

But my personal favourite tweet during London 2012 was from our chief sports writer, Tom Fordyce. In seven words it summed up the sheer disbelief that many of us felt at what we were seeing from Team GB - plus that peculiar ability of sports fans to switch from despondency to arrogance at the flick of a switch. It read simply:

'World: can we play you every week?'