While many in the UK have spent the past month hoping for less snow, in unseasonably warm British Columbia they want the opposite.

Not that the organising commitee are letting a lack of the white stuff worry them. Their planning continues apace and in our own way, so does ours as the BBC prepares to cover the Winter Olympics, which takes place 12-28 February in Vancouver, for the 14th time.

So what can you expect from us? Well, Vancouver is eight hours behind GMT, so if you are watching in the UK, your live TV coverage will start most evenings at around 7pm and continue through to the early morning UK time. (Here is a detailed guide to what's on when). 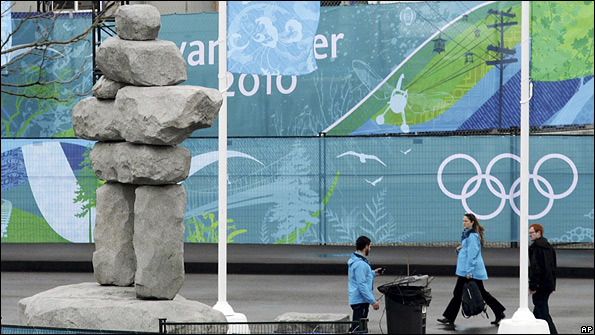 There has been a distinct lack of snow in Vancouver

BBC Two will dedicate approximately 160 hours to the event over the 17 days, plus 2,000 hours of interactive coverage from BBC Red Button.

Viewers with digital TV can access up to six additional streams of coverage to see extended coverage of the 86 individual events. In addition the BBC Red Button will carry a 30-minute Highlights show - available everyday from 0600 - encapsulating all the day's action.

There will be a catch up show every lunchtime on BBC Two featuring the best of the overnight action.

The television coverage will be presented by Sue Barker, Hazel Irvine and Clare Balding - the last of whom will be based mainly at Whistler, the venue for alpine and nordic events two hours north of Vancouver itself, and the site of furious snow stockpiling of late.

(By the way, if you would like more background on the mild weather in British Columbia my colleague Jonny Bramley, the executive producer for our TV coverage, is already in Canada and wrote a blog which is worth reading if only because Jonny namechecks a weather system brilliantly named the Pineapple Express.)

Olympic gold medallist Sir Matthew Pinsent and Lizzie Greenwood Hughes will be reporting on TV and also writing blogs and appearing on the website. Matthew is actually carrying the Olympic torch this Friday, one week before the start of the Games, and we're hoping he will blog about that afterwards.

Also on TV - Graham Bell and Matt Chilton along with Kerrin Lee-Gartner (Canada's 1992 Women's Downhill gold medallist) will guide the viewers through the alpine skiing events; Ed Leigh will be on hand for snowboarding and freestyle skiing; Paul Dickenson and Colin Bryce will follow Team GB's hopefuls in the sliding events, while Paul will also cover ski jumping; Hugh Porter and Wilf O'Reilly will be rink-side for speed skating; British skating icon Robin Cousins (celebrating 30 years since his gold medal on the ice at Lake Placid) covers figure skating with Sue; Steve Cram and Rhona Martin, like Pinsent an Olympic gold medallist, will cover curling; Rob Walker will cover biathlon, nordic combined and cross country; and Bob Ballard and Brent Pope follow the ice hockey.

As for the website, the area I am responsible for, we launched the first version of our Winter Olympics homepage late last year and the full launch is scheduled for 9 February.

We will have biography pages for every athlete competing at the Games. These will tell you who someone is, which sport they compete in, and basic details like height, weight, age and home town. But for the members of Team GB and some of the bigger international stars, we'll have much more information and colour, in text and video, as we bring to life the characters you will see on your screens over the next few weeks.

We will also have guides to the sports, just in case you need a tiny bit more background on the techniques used by, say, Shelley Rudman who won an unexpected silver at the last Winter Olympics four years ago in Turin. 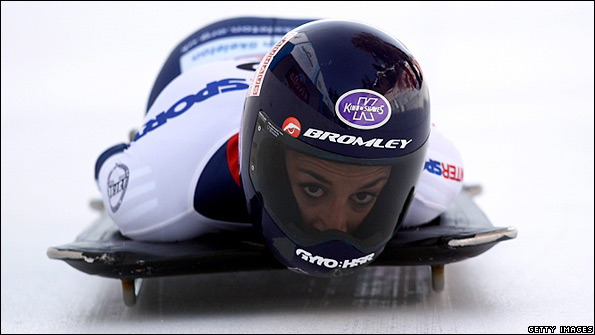 Shelley Rudman is one of Team GB's medal hopes

When the Games start we will of course have medals tables, results and schedules pages, and our popular live text commentaries will be produced from Vancouver's International Broadcast Centre, bringing the local colour and flavour of the Games, as well as the latest news, direct to your PC or mobile phone.

The website will have live video for our UK users, and you will be able to select from a choice of sports via our multiscreen, which of course will also be available on the red button on your TV.

If you are not able to watch live because of the time difference you will be able to watch, on our website, a video clip of every gold medal being won, and also the best Team GB moments (whether they feature a medal or not!). Some of this video will be available on our mobile site.

If you want to whet your appetite for that video content you can enjoy, right now, classic moments from our Winter Olympics archive. Eddie the Eagle? Torvill and Dean? Enjoy!

In terms of reporters, as well as Matthew and Lizzie, we'll have blogs and tweets from the BBC Sport website's Ollie Williams, Rob Hodgetts and Anna Thompson.

BBC Radio 5 live will have Eleanor Oldroyd and Vassos Alexander reporting and presenting from Vancouver. The time zone means Vassos, who usually covers sport for 5 live Breakfast, to report in live to his regular audience, just as he did at the Australian Open. He will also be commentating on the skeleton, women's two-man bobsleigh, and some of the snowboarding. Ellie will report in to the Drive programme.

If you have any questions about any other aspect of what we do on the BBC Sport website I will always be happy to answer them on my Twitter page.

Finally, there is another major sporting event coming up on the BBC, the small matter of the Six Nations. The BBC's rugby editor, Carl Hicks, will write a blog here, on Friday, outlining coverage plans for TV, online and 5 live.

Correction (4 Feb, 0926) - I mentioned above that snow is being stockpiled at Whistler when in fact this actually happening at Cypress. Apologies.