Strong line up for Sports Personality

On Monday night we announced the top 10 contenders for this year's BBC Sports Personality of the Year during the One Show.

I think you'll agree it's an outstanding list and underlines what an exceptional year it has been for British sport. Overall there are nine sports represented and for the first time since Steven Gerrard in 2005 we have a footballer on the list in Ryan Giggs.

You only have to look at those who just missed out like Bradley Wiggins, Victoria Pendleton, Tony McCoy and Andrew Flintoff to see how strong the line-up is. British sport is in tremendous shape as we get closer to 2012. 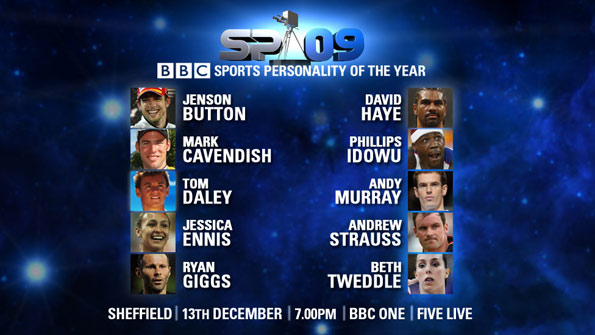 Sports Personality of the Year 2009 top 10 contenders
Over the next two weeks we will be featuring the top 10 in detail across the BBC Sport website and red button, 5 live and The One Show and we will also have a special preview programme on the contenders which will go out on BBC1 at 2245 GMT on Wednesday 2 December.

The show will be a great watch for the whole family with stars such as James Corden, Melanie Chisholm, Denise Lewis, and Patrick Kielty lending their individual support for our contenders.

Only you the British public, however, will decide the winner with a live vote on the night during the show.

There will be no judges involved - it is purely your decision. That brings me nicely to the news that this year Sports Personality will clash with the X Factor final for 90 minutes. I find this hugely disappointing.

Both shows are similar in the sense that they attract big family audiences and are seen as two of the main television events of the year.

My children love both shows and it's a huge shame that they will have to choose. Both are live events and a big part of the excitement is lost by watching a recording.

My children have promised me that they'll stay loyal to their dad and watch Sports Personality, but it's a shame they have to choose and so many households may be split down the middle on Sunday 13 December. A pity when so few programmes these days bring the family together like SPOTY and the X Factor.

For our part SPOTY has a long tradition in the Sunday evening slot and as a big public ticketing event we've been unable to move the date and time.

So is it worth missing Simon Cowell and his wannabes? Definitely.
We have the real thing with 10 stars at the top of their sport challenging for "the biggest prize in sport" as Sir Chris Hoy said so eloquently last year.

We've our best ever line-up and some amazing surprises for our biggest ever show in front of 11,000 people at the Sheffield Arena.

We have some very special awards that are likely to bring the house down, in particular our Lifetime Achievement Award which will honour a true world superstar.

There'll also be live performances, surprise appearances and the greatest collection of sporting talent you're likely to see in one place. Not forgetting one of the closest races for the main award for years.

The 56th Sports Personality of the Year will celebrate the very best of British sport and give you the chance to decide who really has the X Factor.