September is always an exciting time of year for the Sports Personality team.

It's when planning starts to move into top gear as many of the year's biggest sporting events have already taken place.

It is also when some of the leading contenders for the main award start to emerge.

With no Olympic Games or World Cup I must admit I was a bit worried at the start of the year that 2009 might prove to be a bit of struggle for big moments and for a really competitive race for the main Sports Personality of the Year Award. 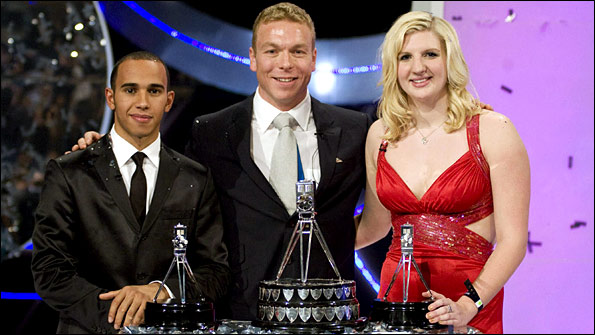 Chris Hoy celebrates winning the 2008 Sports Personality of the Year

How wrong I was to worry! What a sporting year this has already been.

There are already some outstanding candidates to follow in the footsteps of Chris Hoy who, of course, picked up the famous trophy from Michael Johnson in Liverpool last December.

There's Britain's Jenson Button leading the Formula 1 Drivers' Championship; a number of leading potential candidates like Andrew Strauss, Andrew Flintoff and Stuart Broad from the England team that stunned the Aussies to regain the Ashes and not forgetting the likes of Claire Taylor who helped make 2009 equally as memorable for the women's cricket team.

Thousands of people lined the streets of Plymouth to welcome home teenage diving sensation Tom Daley following his gold in the 10m platform dive at the world championships in Rome after he became Britain's first ever individual diving world champion.

Andy Murray has had another amazing year - is up to number two in the world rankings ahead of Rafa Nadal. And he still has a chance of winning the US Open - arguably his best surface.

Elsewhere, with London 2012 less than three years away the British squad came home from the World Athletics Championships with their best medal haul since 1999.

Phillips Idowu's lifetime best snatched gold in the triple jump and Sheffield's Jessica Ennis is likely to get a magnificent reception at the Sheffield Arena after her amazing comeback from injury to win the heptathlon title.

British rider Mark Cavendish finished the Tour de France in spectacular style by winning the final-stage sprint on the Champs-Elysees. It was his sixth stage-win of this year's Tour and his 10th overall, while the victory also saw him become the first Briton to win the final stage of the world-famous race.

Bradley Wiggins also performed heroically to finish in 4th overall on the Tour, while on the track golden-girl Victoria Pendleton retained her sprint title at the World Cycling Championships in Poland.

And so it goes on - in swimming there were seven British medals at the World Championships including gold for Liam Tancock, Gemma Spofforth and Keri-Anne Payne.

Jockey AP McCoy rode his 3000th winner this year, what a man he is, while Phil 'The Power' Taylor surged to his 14th world title, wow.

Finally, what about golfing super-mum Catriona Matthew - she won the women's British Open by three strokes at Royal Lytham and St Annes - just 11 weeks after giving birth to her second child. She also became the first Scot to win the title.

There are so many success stories this year it promises to be a fantastic show. Check out our Sports Personality temperature check for more on this year's potential contenders.

And there is still plenty more sport to come, including the conclusion of the US Open tennis, the World Road Championships and the final Fifa 2010 World Cup qualifying matches.

Wayne Rooney is just one of the potential candidates who could make the final shortlist.

Overall it promises to be a great night of celebration in Sheffield on 13 December in front of a record crowd of 10,000.

There'll be plenty of other great achievements and moments to remember as well like Usain Bolt's latest astonishing achievements at the World Athletics Championships and Roger Federer's amazing feat of breaking Pete Sampras' all-time record for grand slam victories.

The event will again be hosted by Sue Barker, Gary Lineker and Jake Humphrey and tickets will go on sale next month with full details appearing on the Sports Personality web site.

In the meantime there will be plenty more twists and turns as the race hots up to become the 2009 BBC Sports Personality of the Year.

The top 10 contenders, once selected by sporting experts from within the media, will be announced during the One Show on BBC1 at the end of November and the winner will again be voted by the public via a telephone vote during the live show.