It always feels like a long off-season but the planning for the new 2009 season is already well under way. We are expanding our coverage again this year and will be showing all the qualifying sessions (125, MotoGP and 250) on Saturday afternoons on the red button alongside our existing coverage on race day - 125, 250, MotoGP and MotoGP Extra - which all adds up to over seven hours of coverage a weekend.

We've been getting a lot of feedback both here and on other bike forums about a couple of key points. One has been our commentary line-up for this season and the other about not being able to record red button coverage. Both of these issues have been exacerbated by Eurosport losing the rights to show MotoGP for the forthcoming season leaving the BBC as the exclusive broadcaster for the sport. 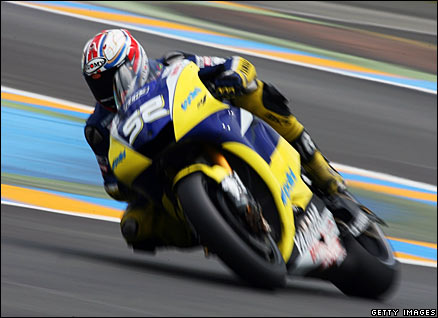 First and foremost I want to point out that any decision about rights is made by Dorna, the rights holder, and not by the BBC. We are in the last year of a pre-existing contract and are delighted to have signed a new deal starting in 2010 which will take us through to the end of the 2013 season.

To give the situation some context our coverage attracts average audiences of 1.1 million with an approval rating that has been the highest for any terrestrial programme in a given week. We believe the BBC team is key to that success and we are looking forward to another exciting season in 2009. In terms of presentation, Suzi Perry has a wealth of experience from years of fronting motorbike racing and our pitlane reporter Matthew Roberts has worked as a journalist within the MotoGP paddock for eight years before joining the BBC and has excellent connections with the teams enabling us to break key stories last year.

Charlie Cox and Steve Parrish will once again be in the commentary box. Charlie is an experienced lead commentator with a great passion for and extensive knowledge of motorbikes whilst Steve raced at the very highest level finishing fifth in the world championship.

We have taken on board feedback about the non-recordable nature of the red button when viewed on certain platforms and as a result we will be looping the qualifying on Saturday afternoon and evening and will do the same with the races on Sunday into the following week. A timetable for this will appear on the website at the start of the season and will be updated race by race.

The inability to record via the red button is a Sky box issue rather than a specifically BBC one but we are doing all we can to enable you to watch the sessions you may have missed live. We will also be supplying additional Freeview details so you will be able to record our coverage when viewing the red button. There have also been questions about why we can't use our other channels to show the 125 and 250 classes. Under the terms of the licence we can't turn BBC Three or Four into a sports channel although we can use them occasionally and they are unavailable during the day as the bandwidth is used by CBeebies and CBBC.

One final point to answer is whether the BBC signing F1 will affect the MotoGP coverage and the answer is yes, but only in a positive way. We will be working with the F1 team to maximize opportunities to promote MotoGP. David Coulthard is part of the F1 team and a bike fan too who has come to the race in Brno for the last few years. The races don't clash as the rights holders are keen to avoid this and the start times are offset on dates where both series are racing. The British MotoGP will follow the Hungarian F1 meaning we get to put the Donington race on BBC One, which is fantastic.

Coverage of any sport is hugely subjective. We always review our coverage at the end of the season and I frequently read the comments posted on a variety of websites including this one. We are very proud of our coverage and in being able to bring top-class bike racing to a wider audience, we believe we have the best team to lead our programme. I am always keen to get feedback and to find out what you'd like to see in the show so please let me know below.