Behind the scenes at the Super Bowl

And so it turns out the unbeatable Patriots turned out to be beatable after all.

I guess most of you who stayed up on Sunday night expected to see Super Bowl history made, but not in terms of a Giants upset.

Regardless of who you were supporting, there's no doubt that it was one hell of a finish, and we're glad that nearly half a million of you stayed up until 3.30am to watch it with us.

Being out there in Arizona was a massive buzz for the team - in terms of scale, I can only describe it as the Olympics in a day - with added showbiz.

Mike Carlson, our studio guest, put it better - 'the Oscars, the 4th of July and the FA Cup Final all rolled into one'. 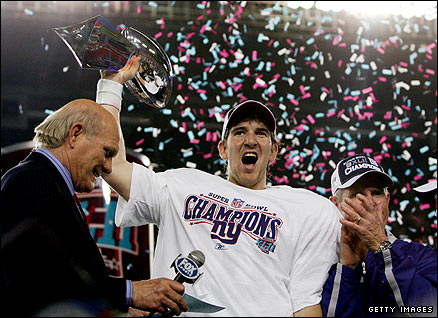 Everything about our Super Bowl experience seemed to be on a huge scale and incredible slick - probably the only exception was being shipped to the stadium on those school buses like Otto drives in the Simpsons, but even that had a certain charm.

I made countless trips from our truck to the studio on the day of the game, and it seemed every time the lift doors opened, there was a celebrity like Roger Federer or Hugh Laurie, or an NFL legend like Jerry Rice or Jim Brown waiting outside.

After a while you were disappointed when you didn't bump into someone famous. And that's before you get to the game itself, which was unforgettable for so many reasons.

Anyway, thanks ever so much for all your comments and questions - I'll try to get through a few now.

Most of them centred around why we didn't go for the US network commentary, this year provided by Fox's pairing of Joe Buck and Troy Aikman.

We took the decision back in December, when the NFL makes its requests for video and audio feeds.

We felt the world feed was the best option to go with as there would be a lot of new viewers - or at least occasional viewers - to the game, who we didn't want to exclude with commentary that occasionally assumed a little too much knowledge of the game.

Looking at the audience figures, the Super Bowl peaked at around midnight, when there were a combined 1.2m viewers on the BBC and Sky.

Compare that with the 200,000 peak for the Conference Championships a fortnight before, and you get an idea of how many people tune in solely for the Super Bowl itself.

In the event, I thought the commentary was pretty good - Dick Stockton did pause to explain things like yellow flags, the red zone and the Pro Bowl, but fairly succinctly - and if anything Sterling Sharpe was at times too technical for a World feed, but I certainly wasn't complaining.

Either way, I don't think it was as dire or terrible as some of you feared.

However, some of you also asked whether it was possible to put Fox on the red button - which was a fair point.

Realistically, last week was probably a little late in the day to get that in place, and our main fear was filling the ad breaks. Now this gets a little complicated, so bear with me...

The world feed has a fixed plan of 25 ad breaks, all 90 seconds long, with five per quarter and five at half time - that way each of the international broadcasters know where they stand and can place their commercials accordingly.

The Fox broadcast however does not match it identically, and they'll often take extended breaks to make up for lost time (certainly the Giants 10 minute opening drive didn't help them on that front).

Obviously we only had the one studio, so we couldn't fill different length ad-breaks simultaneously. The odd 30-seconds of silence here or there might be one thing, but the two 10 minute holes either side of Tom Petty at half-time might've been a little strange. 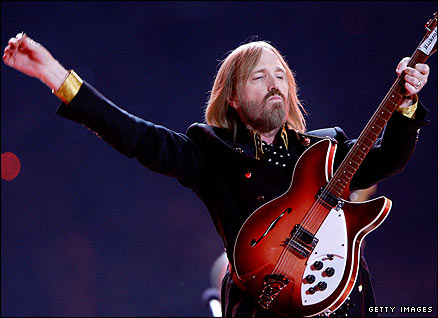 The BBC would also have faced a couple of challenges editorially with the US network coverage, as there are increased levels of sponsorship and advertising as part of the broadcast - as many of you who watch the NFL weekly will know.

Having said that, the door is certainly not closed for next year - it's NBC's turn to cover the Super Bowl in 2009, and the prospect of the legendary John Madden commentating on the BBC in some form is certainly tempting.

On the subject of world feed ad-breaks, they certainly kept us on our toes. The NFL employs an assistant director to warn the international broadcasters when breaks are coming - we had his feed on a speaker in our truck, and he would count us in and out of the commentary.

When the final break was done midway through the fourth quarter, we assumed we'd heard the last of him. How wrong we were.

Now I don't know if he was a big Patriots fan, or simply had bet a large amount on them winning, but what came out of that speaker during the Giants' winning drive is probably not printable here.

Suffice to say he gave us a lot of entertainment, and at the end of the day Eli Manning's arms were still in one piece, so no harm done.

You also asked about next season, and increased coverage of the play-offs and the possibility of broadcasting the Super Bowl in HD.

It's certainly something we'd like to do - especially with the increased level of interest in the NFL that will come from games at Wembley for the next three seasons and further TV coverage on satellite and terrestrial TV. We'll be assessing the response to our NFL coverage in the near future, and I'll try to keep you posted of any news.

Finally just a big thank-you to everyone who complimented us on our coverage, especially the studio trio of Jake Humphrey, Mike Carlson and Rod Woodson.

The guys were a joy to work with, even when we weren't at our professional best at supporting them. There was barely five minutes to go until we were on air when Rod slipped on his headphones to find that he couldn't hear the game, couldn't hear the director, and couldn't hear Jake and Mike - but yet had full commentary of Newcastle v Middlesbrough on Match of the Day 2.

Aaah, the joys of television. We'll get it right next year Rod, honest.