Championship football and more on the BBC

As Head of Sport, I get lobbied a fair bit. Perfectly fairly, people want to see their passions reflected on the BBC's airwaves - and there are two areas that get mentioned a lot.

The first is cricket. I'm repeatedly asked when it'll be back on BBC screens, to which all we can say is: watch this space. The rights will be tendered in the next year or so, and we've said we'd like to bid.

The second is non-Premier League football. Fans have argued consistently here on this blog and when I've been out and about that the BBC's television portfolio should reflect the 72 clubs of the Football League as well as the Premier League giants on Match Of The Day.

So today we have what we believe is tremendous news. The Football League has awarded its TV contracts for 2009-2012 to a joint bid from the BBC and Sky, and it means that coming from the autumn of 2009 to BBC Television will be:

- Ten exclusively live first-choice Championship matches per season, the first time The Championship has been live on BBC television

- The Carling Cup Final live from Wembley - simulcast with Sky

And it's more than just conventional television. We'll also have broadband rights, clip rights, video on demand and much more. Our website will be able to show goals from all 72 Football League clubs, and we'll offer our best-ever service to football fans across England and Wales. 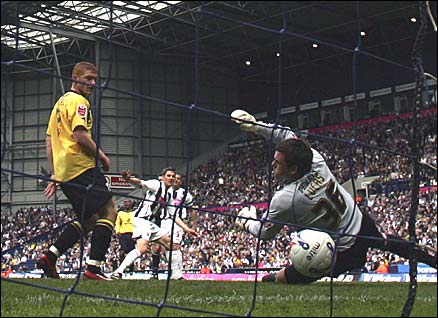 Meanwhile, our other football commitments remain strong. Match Of The Day is in the first year of a new three-year deal with the Premier League. We have Euro 2008 next summer, and then the biggest events in international football - the World Cups in South Africa 2010 and Brazil 2014.

I've mentioned many times that the rights market remains very competitive - and our portfolio will always have its ups and downs, ranging from the loss of the FA Cup earlier this year to the successful renewal of the Six Nations and The Masters contracts in the past month. But we're genuinely excited about the potential of the Football League properties on the BBC, and our aim in the three seasons of our agreement is a simple one: to showcase the new acquisitions across all our platforms, and to make our commitment to football deeper and stronger at every level.