The 2007 Carnegie Challenge Cup was always set to be a memorable competition with the lure of the first rugby league final at 'New Wembley' finally hoving into view for two sets of players and supporters.

So with the hand of history beckoning there will be plenty of sweaty palms and twitchy fingers on display in two fascinating semi-finals live on BBC TV and Five Live this weekend.

First up on Saturday (BBC ONE, 12.10pm) is Bradford Bulls v St Helens. For many pundits this would have been the dream final as these two sides have dominated Rugby League since the Super League era began in 1996.

The Bulls and Saints have won nine Super League titles, five Challenge Cup wins and five World Club championships between them in 11 seasons. They have dominated the sport in the way that Manchester United and Arsenal dominated football from the inception of the Premier League in 1993 - and the Russian oligarchs are yet to arrive in RL.

Two key men in Bradford's recent successes, Brian Noble and Robbie Paul, will be our guests on Saturday alongside presenter Phil Jones and we'll also hear from Saints' Paul Sculthorpe who this week announced his retirement from international rugby. 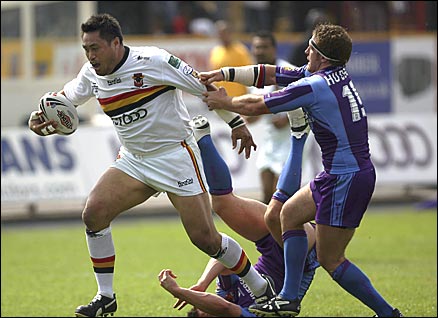 Scully is one of the finest players of his generation and has been a great servant for Saints since his world record £375,000 transfer from Warrington nine years ago. But in recent times he has had to spend too much time in hospitals and TV studios as a result of a depressing number of injuries. He hopes to return for his club next season and we wish him well with that ambition.

His successor as GB captain will be one of a number of topics under discussion in our Interactive Forum which will follow the first semi-final on BBCi at around 2.25pm. Press the red button.

Another topic sure to provoke your e-mails and text messages is the four-point penalty handed out to Wigan this week for breaches of the salary cap last season as they strove to avoid relegation.

The Warriors feature in our second semi-final on Sunday (BBC TWO, 3.00pm) when they take on a Catalans Dragons side looking to become the first French club to reach a Challenge Cup final.

Wigan, of course, made Wembley their second home as they dominated this competition from 1988 to 1995 with eight successive Challenge Cup triumphs. They also won the first ever Wembley final at the original stadium back in 1929.

If Catalans were to pull off a surprise win at Warrington on Sunday it would be a huge boost to the RFL's controversial decision to site a Super League team in France for the second time. The BBC's coverage is being shown live on Canal + TV station throughout France.

While Wigan's latest expensive Aussie import Trent Barrett has looked to be on a personal mission to get his side to Wembley, Catalans former Warrington player Jerome Guisset has issued a rallying call to his old club's fans to get out and support the French team on Sunday.

Justin Morgan, who coached another French club (Toulouse) to the semi-finals in 2005, and John Kear will join Clare Balding for this one.

However, if you can't make either match, highlights of both will be available on bbc.co.uk/sport. St Helens forward Jon Wilkin will also give his reaction to his side's semi-final with Bradford in his regular column.

They always say that semi-finals are the worst matches to lose in the Cup. Never will that adage be truer than this weekend. It should make for two truly dramatic contests for viewers, listeners and readers.