Does Thaksin's takeover pass the test?

How do you judge whether someone is a “fit and proper” person? It’s not an easy question for anyone to answer with absolute conviction. So the Premier League might just be regretting that their test of club directors’ credentials is called the “Fit and Proper Persons Test.”

If you haven't seen it, basically it's a list of offences ranging from theft to forgery - you can see the full criteria here.

As the League points out: “The rules go above and beyond any requirement by UK Company Law.”

But they are primarily financial offences - and clearly don't meet everyone's criteria for a “fit and proper” person.

Our special report on Thaksin Shinawatra this week has raised some important issues for the League, and for football fans in general. 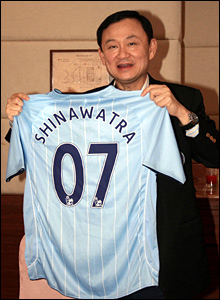 A leading human rights group, Human Rights Watch (HRW), believes the “Fit and Proper Persons Test” doesn't go far enough. They argue that football's governing bodies should have consulted them before allowing Shinawatra to buy Manchester City. The Premier League didn't - and have no plans to - meet with them, despite a direct request from HRW.

The bottom line for the League seems to be that moral judgements are for the Government to make, and not football.

It's not a stance that everyone agrees with. Author and journalist Tom Bower wrote in The Observer this weekend that: “Football is not a utility or a bank, but part of the fabric of England, uniting so much of the nation.”

Adding: “No other country allows the crown jewels of their major sport to become the uncontrolled playthings of investors whose backgrounds remain untested.”

The Premier League would argue that's unfair, and point to their “Fit and Proper Persons Test” as an example of their higher corporate standards.

Ultimately, it will probably be an issue for supporters. If they become disillusioned with the ownership of British football, then they will vote with their feet.

Interestingly, season ticket sales at City have already topped the 25,000 mark and are well on the way to beating last year's total sale of 27,000.