We have been overwhelmed by the response to the unveiling of London 2012’s new logo.

A page we set up asking for opinions on our 606 site smashed the 1,000-comment barrier, a record, and was heading towards 1,500 comments last time I looked.

Sadly for the organisers of the new brand launch, most of the reaction seems pretty negative, and not just with our punters either.

“I have vomited better logos,“ was one of the harsher assessments on 606, while others seemed willing to at least give it a go and attempt to find creative meaning in the jagged shapes beyond the "obvious".. 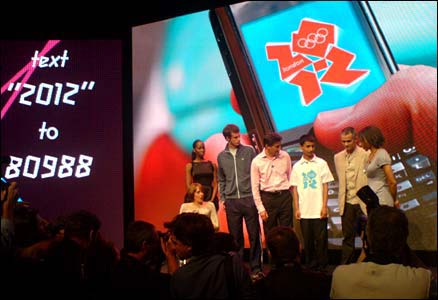 * A long distance runner on the start line
* mainland Britain
* Lisa Simpson
* a broken swastika
* car parks surrounding a small stadium in the middle
* Vicky Pollard in a pink tracksuit getting down with the Elephant Man in a pink tracksuit
* A window I recently kicked a ball through
* A pink Larry Grayson doing the "I'm a little tea pot" dance.

As one 606 user Willyhonda asked:

Is this supposed to be one of those picture puzzles that eventually makes sense after slowly refocussing your mind's eye? It has gone beyond the acceptable limits of effective communication by trying to be too clever. It represents already-dated grafitti (even grafitti can be contemporary art) and is like a Channel 4 title sequence gone wrong. Worst of all, it's been trademarked - who on earth would want to copy the thing?! It's stimulated debate nonetheless so the cleverness hasn't been lost there.

While some with more vivid imaginations suggesting viewed in a certain light, the logo was reminiscent of an unsavoury sex act. Ridiculous..

Anyway, as I said last week, 2012 organisers are keenly aware of the onslaught of the digital age.

Indeed the way the logo will fit neatly onto the screen of a mobile phone - the default gadget of all young people - is one of the things going for it.

They also feel the fact the logo "is never static and will always be moving", is another plus (ie in digital media it flicks through the gamut of its four garish colours and - if the video is anything to go by - gives a little animated shiver now and again) - though I thought animated web graphics had been proved to be intensely annoying in usability studies.

However, the marketeers perhaps did not anticipate the way "new media" would be so quickly turned against their new brand:-

Within a few hours of the launch an online petition calling for the old logo back was doing the rounds on 606 and social networking site Facebook - and had surpassed 3,000 signatures.

While a vote on the news story on bbc.co.uk/sport did not make palatable reading, with more than 80% opposed to it last time I looked.

And many people took the trouble to design their own and send them to bbc.co.uk/news - something the official 2012 website is also encouraging (or is this one giant media double bluff - launch dodgy logo then "withdraw it" due to public demand and reveal a new "user generated" one, to use the jargon...)

As it is, unfortunately it seems 2012’s attempt to connect with young people appears to have been perceived in a “dad at the disco” kinda way - or as 606 user AnotherWestie described it:

It looks like a logo designed for young people by old people who don't understand young people.

I was at the launch of the new logo. And while 95% of what was said was powerful, admirable and genuinely inspiring – sadly the logo simply did not seem to meet the level of expectation raised by Seb Coe & co in the preamble.

Coe, Denise Lewis, Kelly Holmes and Ade Adepitan each talked brilliantly about how the Games could be used to inspire the nation to social, structural and cultural change.

Whether it was the 62-year-old gran who kicked smoking by taking up karate (and winning her black belt), the young boy gymnast hoping to win a gold medal at 2012 or the kid hoping to overcome his love of sausages to become vegetarian - the message was that 2012 could be used by everyone as the catalyst to change their life for the better.

Lewis took to the Roundhouse stage spouting tempting phrases such as “it's not a badge or a stamp but a state of mind” and “be the change you want to see” – in a manner which seemed more in keeping with an Anthony Robbins self-help rally.

So I was expecting something more sophisticated, more slick, more corporate that what was revealed.

To me – a teenager in the 1980s - it seemed more like a throwback to that era of fluorescent T-shirts, stone-washed jeans, big hair and those two nasty bedfellows - cheap & tacky.

Instead it was, as one 606 user put it: “Like the 2012 Committee had a student intern who said he could use Photoshop and they said ‘Great, you can design the logo’." 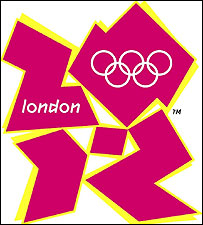 Maybe the 2012 organisers will have the last laugh and their logo will capture the hearts and minds of the kids they’re after. Or maybe this very debate will run and run and provide more bang for their buck than any paid-for advertising campaign - and that’s what they’re after all along.

In the meantime, just tell me this:- what is that square bit in the middle?