So here it is, the big one, the British Motorcycle Grand Prix, and more than 100,000 fans are expected to descend on Donington Park over the weekend.

It’s always a real privilege to cover your home Grand Prix, particularly as the championship this year has already produced some great racing this season and Donington is another good track for the riders.

However, the weather is also threatening to play its part - with torrential rain forecast for the weekend, the campsite may well be giving Glastonbury a run for its money at this rate. It could also turn the pre-race predictions on their head as we saw in Le Mans where Chris Vermulen took his maiden win earlier in the season. 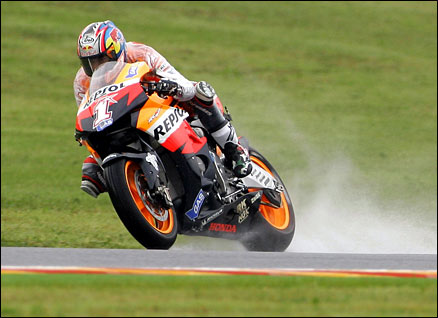 We have some great features as part of our build-up to the big race: Steve Parrish, his former team-mate, Graziano Rossi, Giacomo Agostini, and others pay tribute to the legendary Barry Sheene 30 years after he won his last world title.

Nicky Hayden hooks up with football star Michael Owen and the legendary Murray Walker will be talking to Valentino Rossi. Murray has commentated on many of the great bike racers and is full of admiration for The Doctor’s extraordinary talent.

I can't tell you too much about it as we're filming it tonight!

And if that’s not enough, Steve Parrish has yet again been allowed out on an 800 - this time it’s the Kawasaki. He’s still the only person, apart from the official riders, to test one of the new bikes and now he can compare the ZX-RR to his earlier ride on the Suzuki in Jerez.

Steve's lap was all done with on-board cameras supplied by BBC Special Facilities, one overhead rig they built specially for us and two standard mini-cams attached to the bike.

With these bikes being worth around $1m, I’m just relieved he didn’t crash it!

You can catch all the action this weekend on the BBC - qualifying on Saturday 23 June from 1345-1500 on BBCi - just hit your red button and join us to see how the grid will form up for Sunday. On Sunday we've got an extended build-up to the race starting at 1215 on BBC TWO and then all the behind the scenes news after the race on MotoGP Extra at 1400 via your red button. If you can't get to your telly, all the action will also be streamed live via the website at bbc.co.uk/motorbikes.

It’ll be a busy weekend for sure and with most of us leaving here on Sunday night and heading to work at Wimbledon the next morning, it’ll be quite a contrast!!