The car park is how much?

Sitting in Heathrow Terminal 4 is a lovely way to pass a few hours. Child 2 is due and I have miscalculated the time needed to cross London in the small hours. There is not much to do here though the coffee team are pretty cheerful. It was lovely to hear The Dark Lord in real time as a drove to the airport-what a  great show that is!  So a ridiculously small amount of sleep should mean a hysterical presenter makes it to R2 later in the day.
The main thing child 2 will notice is that child 3 is (I think) now taller than her. This may not go down well but hey ho.

I can sit here and watch the arrivals and after a while it feels like you're in Love Actually (though no Keira Knightleys so far). Last night's chat with the emigrating woman being a case in point. To leave your family in the car while you call the radio station to say goodbye and ask for the family song is very Richard Curtis. Anyway the flight has landed, the doors have opened and my luggage and taxi skills are needed...

Well thats all fine then and a show today with the latest bookclub offering The Shock Of The Fall by debut novelist Nathan Filer (great name). He's a mental health nurse and poet and you can tell. He's written of Matthew who, at the age of 9 believes he's caused his older brother's death. Matthew has schizophrenia, is 19 and the narrator of the book. It is hard to describe properly (at least for me) so check out a chapter on this site if you fancy it. Nathan on after 6.

And Helen Mirren oldies? I think so. After her splendid rant at the band outside the theatre, dressed in full HRH regalia, she deserves a few tunes.

Have sprightly and chirpy Tuesday. See you after 5

One day at a time 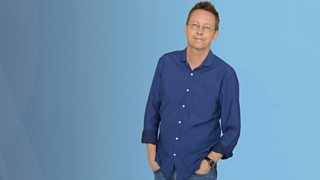