Chris Ashton's swallow dive might have become the emblem of England's resurgence in this season's Six Nations, but Toby Flood's boot has been arguably as impressive.

England have a 100% goalkicking record in this season's tournament, and most of those 15 kicks have been converted by Flood.

His metronomic boot has brought back memories of Jonny Wilkinson in his pomp, and it's perhaps no coincidence that Flood has recently been working with Wilkinson's long-time mentor, Dave Alred.

"Dave has raised the bar for what we're doing," the Leicester fly-half told BBC Sport at England's Pennyhill Park training base earlier this week.

"In terms of kicking and development, he's been fantastic. He's great on the mental side as well, because he has a good understanding of what it takes. I've really enjoyed working with him."

Wilkinson simply describes Alred as "the best kicking coach in the world".

I hadn't realised the 62-year-old was working with England again until he appeared next to manager Martin Johnson at Twickenham during the crushing 59-13 win over Italy two weeks ago.

A Rugby Football Union spokesman told me he was working with England only as a "consultant", not a full-time employee, and that he wouldn't be available for interview during the team's media sessions.

Instead I met Alred at Wentworth, where he often works with the golfer Luke Donald, and he explained he was working with England on a "temporary arrangement".

"At the moment I've committed to Johnno," he explained. "I've said 'let's get going and sort the details later'. It's all a bit up in the air to be honest, I'll just see what happens.

"The RFU have got a lot of other things crossing their mind right now, like a massive restructuring."

Alred was controversially sacked by the RFU in 2006, along with defensive coach Phil Larder and skills coach Joe Lydon. Sir Clive Woodward, who introduced Alred to the England set-up and has described him as "one of the best coaches I have ever worked with, in any discipline", was heavily critical of the decision.

The RFU made the decision after a comprehensive review of the coaching set-up and insiders suggested the coach was starting to stray from his kicking duties into areas like mental preparation and skills coaching, and even suggested he could be resting on his laurels.

One RFU board member told me Alred was "brilliant, but almost impossible to manage".
The man himself admits the decision hurt him deeply. "The way it was handled, I would be kidding myself if I didn't feel a little bit bitter, being assessed by people that had never seen me operate and never took the time to find out," he said.

He was subsequently replaced as kicking coach by former Bath player Jon Callard, who has now made way for Alred again in the England elite set-up. Callard is now working with the RFU Academy.

Alred was certainly busy after he left the RFU's employ five years ago, coaching golfers Donald and Melissa Reid, working with Woodward at the British Olympic Association and coaching in sports as diverse as Australian Rules Football and judo.

But it's clear that rugby, and goalkicking in particular, remain his greatest passion.
And he's certainly relished his return with England.

"It's been great working with Martin Johnson and his coaches and the players have been fantastically responsive," he explains.

So how exactly did he come to be involved again?

"I was involved in a piecemeal arrangement, working one-on-one with Jonny, and he was available for the Autumn internationals last year," he says. "But when I turned up, Jonny got injured. Toby then asked to work with me and things went from there."

The results have certainly been impressive. Alred has now been working with England since the start of last year's Autumn internationals, and in the six subsequent games the team have slotted 92% of their penalties and conversions (36 from 39).

Those stats compare favourably with last season's Six Nations, when England had just a 65% success rate (17 kicks from 26 attempts).

I should add that most of the kicks in last season's tournament were taken by Wilkinson, and that Alred had still been working with the fly-half at Toulon. But the improvement in Flood's kicking has been particularly marked.

Alred says Flood has been learning the principles that have made Wilkinson so formidable. "As athletes, you don't always get it right, but if you can have a technique where if you don't get it right it STILL goes over, you're much better off," he says.

"That's basically what I've done with Toby, which is what I still do with Jonny. His body does the aiming and his leg is less dominant. It's similar to golf, where there are two parallel lines - one where the body turns towards the target, the other where the ball goes.

"If you apply that to goalkicking and you find that you aim with the body, it still goes over."

Alred says he has long been "fascinated with the reasons why one day people can be sensational and the next perform like a dog" and believes he can apply his principles for performing under pressure to any sport.

This obsession began when he studied performing under pressure for a PhD at Loughborough University.

"I investigated anything that would help to support people performing better under pressure," he says.

Alred played American Football for the Minnesota Vikings and had a low-key career as a rugby player after returning to England in 1979. 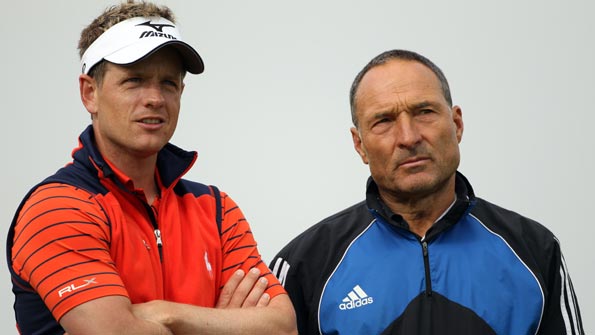 His coaching career began when he worked with Bristol full-back Alastair Hignell, the former BBC commentator, and Bath duo Jon Webb and Stuart Barnes during the amateur era.

Woodward recruited him as an England assistant coach, but possibly his biggest break came in 1998, when director of rugby Rob Andrew asked him to come up to Newcastle to work with a promising schoolboy called Jonny Wilkinson.

"It's still a pleasure to work with Jonny and he's still a phenomenal goalkicker, who is eager to improve all the time," Alred says. "You still hear the sighs from the opposition when he comes off the bench, players and coaches saying 'oh no, it's Wilkinson', which is a great tribute to Jonny."

Alred says he still learns new things about coaching and about goalkicking every day.
"I thought my studying and my work would lead me to some answers, but it has only ever led to more questions," he says.

"I have become more hungry for any edge and I'll work in any environment where there's pressure."

And that's a quest that seems to be serving England well at the moment.

I'm a sports news reporter and write about most sports, but especially football, rugby union and cricket. I'll try and give you some insight into the stories setting the agenda in this blog. You can also follow me on Twitter.

You can stay up to date with Simon Austin via these feeds.