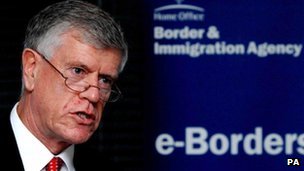 Commentators wonder what to make of the former UK border force chief Brodie Clark’s evidence to MPs about the row over the dropping of some border checks over the summer.

The Independent’s editorial argues there is much confusion but no documentary proof that Home Secretary Theresa May lied to parliament:

“What Ms May appears not to have known is that, alongside the pilot she had approved, normal checks were being lifted routinely, as 2007 health and safety rules were invoked by airport operators anxious to reduce queues. Fingerprint checks at Heathrow were suspended far more frequently than even Mr Clark appears to have thought wise. That is a debacle that the Government now needs to address. Border controls should be enforced, with appropriate sensitivity."

The Telegraph’s editorial suggests the argument over border control masks the bigger story of why it has become necessary to relax border controls at all:

“This country’s transport infrastructure is simply creaking under the strain of dealing with so many people. Perhaps the greatest revelation from yesterday’s hearing was that on 50 occasions over the summer, border checks had to be suspended on health and safety grounds at Heathrow because planes could not land. If ever there was a case for a new London airport, this was it.”

“It is a great irony that the idea of better focusing border checks, which is what Mrs May and Mr Clark were in different ways trying to do, is not merely sensible but imperative in the context of deep cuts. While necessary, it is not something which Conservative ministers feel able to articulate, after years of hectoring Labour for losing control of immigration.”

Over at the Spectator, Peter Hoskin speculates that the “simmering feud” between Brodie Clark and Theresa May is not good for her career:

“Her reputation in government has been built on the idea that she's a ‘safe pair of hands’ at the Home Office; but, until we reach some sort of catharsis, these attacks from Clark will cast that into doubt. And already people are voting with their betting slips. Over at Ladbrokes, May is now the 6/4 frontrunner to be the next departure from the Cabinet. And her replacement if she does leave? Let's just say that the favourite is a Clark-with-an-E.”

Finally, at the centre of the debate is the former head of the UK Border Force, Brodie Clark, who writes in the Times that an inquiry isn’t necessary:

“This whole affair has exploded so fast that it quickly went out of control. Several questions remain: who was feeding the press a stream of untruths together with the Home Secretary’s expression of outrage? Why were declarations of my guilt made without proper investigation? Why was the top of the Home Office shop so weak it failed to keep control of its own affairs? I am sure the public will welcome an inquiry - but do we really need the three that were announced today? It might have been more cost-effective to have established the facts first.”