Daily View: What now for Egypt? 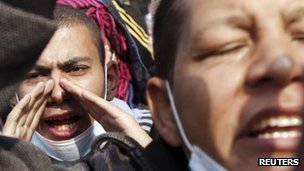 Commentators ask what now for Egypt? This follows another night where Egyptian protesters occupy Cairo's Tahrir Square despite an offer from the military to bring forward presidential elections.

Amor Eletrebi has participated in protests at Tahrir Square in January explains to al-Jazeera why he went back to take part in the current protests. He says the protesters have discovered a difficult truth:

"Even the promised parliamentary elections to be held by the end of this month, has become a big zero at the back of our heads. We've learned a hard lesson: no act of revolution can exist under military rule, and therefore no further moves should be taken with the military still in power."

In The Times Heba Fatma Morayef, the Egypt researcher at Human Rights Watch, thinks the military fails to understand that Egyptians lost their fear in January so cannot be ignored:

"The growing numbers in the square confirm that there is no way back. There are no easy fixes. The military has for months pretended that the civilian government has some independence, while every Egyptian knows that the Prime Minister has no power to make decisions without SCAF [Supreme Council of the Armed Forces] approval. These protests loudly proclaim a breakdown in trust in the military. They also reflect public outrage at the continuing military repression and at economic and political paralysis.

"The SCAF needs to understand that it cannot ignore the demands of Tahrir protesters and dismiss them as a non-representative minority. The time has come for a genuine transition to civilian rule, led by a broad-based national consensus government."

But Marc Lynch argues in Foreign Policy that elections should be postponed:

"Many political forces have suspended their campaigns, and few voters are focused on the election. It is unlikely that a body elected under these conditions will command real legitimacy. As much as it pains me to come to this conclusion, and for all my fears that this will only lead to a longer-term delay in a democratic transition or become an excuse to exclude Islamists, it probably does now make sense to postpone the elections for a short period."

Andrew Reynolds explains in the New York Times that the elections are likely to fail because the rules suggested by military leaders "virtually guarantee" that the parliament elected will not reflect the votes of the Egyptian people:

"The sidelining of smaller Islamic and secular parties would damage citizens' faith in the democratic process, and the exclusion of the minority Coptic Christians from significant representation in Parliament could be catastrophic.

"Copts are unlikely to vote for Islamic parties and, after October's violent street battles between Christian demonstrators and the military, they have lost faith in old liberal movements like the Wafd Party. They are instead coalescing around niche parties like the Justice Party and the Free Egyptians. But these groups are polling at less than 5 percent - not enough to win more than a handful of seats. And if Copts are shut out of Parliament, they are also likely to be absent from the committee which will draw up the new Egyptian constitution."

In the Financial Times Majid Nawaz, chairman of the counter-extremism think-tank Quilliam, argues Islamists aren't a threat in Egypt:

"The simple fact is that though Egypt does indeed face a serious challenge with extremism, it was these repressive state policies that were largely responsible for the rise of such extremism in the first place. Closed societies will breed closed minds. In recent years, and due in part to the effects of social media, many of Egypt's younger Islamists are moving to the more democratic Turkish model."