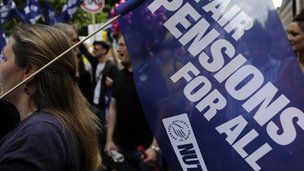 Ahead of the public sector strikes over changes to pensions on Wednesday commentators debate whether the cuts are fair.

"Of course, the real culprits are the union leaders, who - like the antediluvian monsters they are - refuse to accept that an ageing population and the dire state of the national finances make public sector pension reform unavoidable.

"Indeed, one of the growing scandals of 21st century Britain is how, on average, the public sector is both better paid and better pensioned than a private sector on whose shoulders alone rests the awesome task of dragging the UK out of recession."

The Independent's editorial argues it is impossible to justify a strike in this economic climate:

"Faced with a slew of gloomy indicators, any avoidable economic drag is inexcusable. The trade unions must go back to the negotiating table, hammer out a deal and avoid industrial action. This is not about an ideological battle over the size of the state. It is about what the taxpayer can afford."

The Times editorial says pension cuts are fair to the taxpayer:

"Asking for higher contributions is undoubtedly hard on people whose living standards are already being adversely affected by a pay freeze at a time of high inflation. And being asked to work longer before retiring is unwelcome news for many. Being hard and unwelcome is not, however, the same as being unfair.

"Reform of public sector pensions is essential. Agreement on proposals made during the previous Labour Government's term must be accompanied by measures that make an earlier impact on the amount spent. Without reform it will take too long before savings are made and the taxpayer will be asked to bear too much of the risk that projected spending has been underestimated."

The Founder of the Taxpayers' Alliance, Matthew Elliott, says in the Daily Express he has other concerns about the costs to taxpayers - the cost of union reps:

"There are more than 1,000 local authority staff who could be keeping services such as libraries open; 645 at various agencies such as the HMRC who aren't around to make sure they get your taxes right; 458 staff at government departments including Work and Pensions who could be out catching benefit cheats; 282 in hospitals, 100 staff at primary care trusts, 82 staff at mental health trusts and 44 staff at ambulance services who should all be looking out for patients; and 54 at fire services who should be helping fight blazes . Instead they're all working for the unions."

The Sun's editorial urges union leaders to think again about a strike it says is increasingly resented:

"It is selfish because millions of public employees - from teachers and nurses to council workers - already get a terrific pension deal denied to other employees.

"Also, public sector salaries are typically £4,000 higher than the private sector. The strike is reckless because it will cost the country half a billion pounds as we battle an appalling financial crisis."

But in the Guardian teacher Caroline Ryder explains that she'll be striking because she sees a pension cut isn't fair given how hard she works:

"This is why it's hard to carry on regardless when you are consistently put down as not being good enough, and given more to do with less time in which to do it, and told you are worth less money for your efforts. This is why it's demoralising to be told you should keep giving as much of your time and energy as you do already until you are nearly 70. This is why I'm fed up enough with the way my profession is being treated to do something about it.

"I can't say for sure whether the coffers are empty or not. But does that mean I shouldn't strike? Not even slightly."