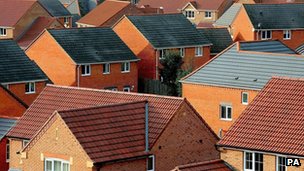 Commentators debate proposals for the government underwriting part of the risk to mortgage lenders, allowing buyers of new homes to borrow up to 95% of their value.

The Times editorial supports the idea of the government using taxpayers' money to re-inflate the housing market, as long as the plan is temporary:

"Some will worry about encouraging people to make highly geared investments in assets that could well fall farther in value. But the risks look reasonable as long as housebuyers treat them as very long-term investments and lenders continue to apply the strict criteria introduced after the credit crisis...

"Given the current state of the market, the scheme looks justified now and the Government has said that it will be reviewed in three years' time. The presumption should be that it will then be shut down unless private insurers are prepared to take on the risk."

Professor in urban economics at the University of Glasgow Mark Stephens tells Channel 4 News that the measures won't tackle the problem of unaffordable housing:

"The government is failing to confront the fundamental problem, which is that house prices are still too high. We might expect house prices to earnings to rise over time as people can afford to devote more of their income to housing - but the income growth from the late 90s doesn't justify the step change that occurred.

"We simply must confront the inflationary psychology that still prevails in the housing market, which means that well-intentioned government interventions are really helping to keep house prices unaffordable for the many whilst providing assistance only for the few."

Michael Collins argues in the Independent that the focus should be on the rental market:

"The criteria for letting needs to be rethought. Once the working class and homeless topped the list; in the current climate housing need has widened to all classes - those unable to get on the property ladder, those that can't afford the high rents of the private sector, those whose homes have been repossessed. These all add to those heavily laden waiting lists. In order to create a system that allocates homes to those most entitled, this idea of 'need' must be redefined."

The Guardian's editorial also picks up on the idea of improving the rental market instead and suggests what would need to be done:

"Of all the differences, the most significant is Britain's pro-landlord regulatory system that gives tenants no more than six months' security of tenure and uncontrolled rents. People rent mainly because they can't afford to buy. The government is now promising a review of the rules. Redesign them so that tenants have real security in decent housing. Compensate landlords with tax breaks. Then a return to the days when a third or more of us rent will be recognised for what it is: a sign of a stable, sustainable economy."

But Philip Johnston claims in the Telegraph that a rental market is against Britishness:

"There is an alternative, of course, which is to encourage the growth of a European-style, dynamic, private rented sector for those who do not want to be part of the property-owning democracy. But as Mr Cameron said, this is inimical to the British character, which has been shaped over the centuries by the rights and liberties that have arisen from property ownership."