Daily View: How should UK borders be controlled? 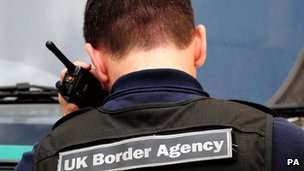 Commentators react after Home Secretary Theresa May's admitted that she had authorised officials at the UK Border Agency to relax security procedures on some travellers coming into the country.

The Times editorial focuses on what it sees as the incompetency of the UK border agency:

"Many questions must now be answered, and chief among them is whether the much-vaunted introduction of biometric passports was worth the expense, given the UK's apparent inability, five years later, to treat them any differently from their paper predecessors.

"More pressing, however, is the culture of chaos at UKBA. This is not a failure which has occurred in a vacuum. It is a whole five years since John Reid, then Home Secretary, described Britain's immigration as "not fit for purpose". The UKBA, formed in 2008 to put this right, has instead continued the chaos by another name."

The Independent's leader column says what is disappointing about the home secretary's statement was the tone of animosity and suspicion against people coming into this country:

"To her, they seem an alien group of would-be terrorists or, worse, 'economic tourists'.

"In reality, most of the people arriving here are either tourists helping an economy badly in need of their revenues, or people on business. The largest proportion are from the EU, with rights of passage and work. The problem with the anti-foreigner rhetoric adopted by Theresa May and regrettably unquestioned by the opposition - which seems to see this simply as an opportunity to catch her out - is that it fails to distinguish between, on the one hand, threats to security from terrorists and criminals, and, on the other, problems caused to society by illegal immigration for economic ends."

Standing up for Theresa May is the Guardian's editorial which says this affair risks jeopardising a "sensible" development in immigration policy:

"Despite its weaknesses, in the face of the daily count of 100,000 travellers passing through Britain's ports it can only make sense to develop a risk-based approach. Yes, the UK border force must improve. The home secretary must also be more transparent. And the conversation about immigration has to grow up."

The Financial Times' editorial also stands up, in part, for the idea of relaxing border controls to make people's first encounter with the country more welcoming:

"The irony is that Ms May's pilot scheme, which allowed border guards greater professional discretion in letting low-risk visitors through with lighter checks, was a step in the right direction: less suspicion of low-risk groups but tighter checks on those pinpointed by intelligence as more likely to be unwanted visitors.

"For this to work, deep changes are needed in resources and attitudes. Cutting UKBA staff by more than a fifth by 2015 will make an intelligent immigration policy less achievable. So will the obstinate view that the only goal of immigration rules is to keep people out."

The Telegraph points the finger of blame at the previous Labour government:

"It ill behoves Labour to make such a song and dance about this affair, given that it was the last government that so lost control of our borders that hundreds of thousands of people entered the country illegally and will never be removed. In the fight against terrorism, our borders are the first line of defence and they need to be as secure as possible. Yet, in an unforgivable act of neglect, the previous administration scarcely had a clue about who came and who left. Labour's time in office was characterised by a porous frontier, shambolic administration and abandoned promises. While we may not yet be entirely clear who is to blame for the latest mess, we certainly know who was responsible for the last one."

Finally Mike Smithson ponders in the blog Political Betting whether Theresa May will resign:

"The home office is always vulnerable to scandals like this - just look at how many home secretaries there were in the last Labour government. The critical thing for May's survival is whether she was involved in the decision."