Daily View: How should Cameron approach talks with Merkel? 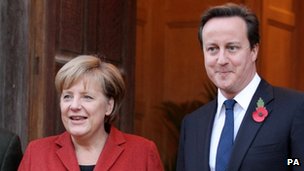 Ahead of the UK Prime Minister David Cameron's talks with German Chancellor Angela Merkel, commentators suggest what David Cameron should say in Germany to try to resolve tensions over the eurozone crisis.

The Telegraph editorial wants David Cameron’s aim in talks with Angela Merkel to be to make sure that Britain doesn’t foot the bill for the eurozone crisis:

“His task is to prevent Britain being drawn further into the eurozone crisis, and to see what advantage can be had from the mess. Evidently, this is not an attitude understood by German leaders, for whom shared sovereignty within the EU has been an article of faith, rather than something grudgingly surrendered. Mrs Merkel will doubtless try to convince Mr Cameron that now is not the time to rock the boat - yet from Britain’s point of view, this is precisely the time, because it is only now that we can exert the leverage to bring about the kind of changes outlined by David Davis on this page. If not now, when?”

"At least there is an articulated version of a 'German Europe', so we can point out its flaws. What is Cameron's vision for a "British Europe"? At the moment, purest waffle. He denounces 'utopian visions', but says nothing at all about how his own utopian vision of a 'networked Europe' would work in practice."

He comes up with a solution:

“Over dinner, let Merkel present her vision of German Europe (more tactfully: German vision for Europe). Let Cameron present his British Europe. Their fellow leaders should proceed to vote, in a strictly secret ballot, on which they would rather be part of. Then, of course, the result has to be leaked - but, even in these uncertain times, that we can still rely on.”

In Der Spiegel Carsten Volkery says Mr Cameron is split about what to say:

“The Cameron government faces a dilemma. On the one hand, they want to keep the greatest possible distance between Britain and the euro crisis. At the same time, they are insisting on their right to have a say. After all, what's being discussed is a change in the very nature of the EU, and the UK is still one of the big three in the bloc.”

However, he goes on to predict Angela Merkel will have to listen to the British Prime Minister:

“But Chancellor Merkel will probably be a bit more diplomatic on Friday. She knows she'll need Cameron on her side if she is going to be able to push through an amendment to the Lisbon Treaty, given that changes must be unanimously approved by all 27 EU member states.”

But Guido Westerwelle, Germany’s foreign minister, warns in the Financial Times that any talks could be in vain as Germany is not going to change its mind on how to save Europe:

“Stabilising the eurozone is in the interest of all 27 EU member states, not least the UK, with its extremely close economic ties. Time to find a solution is running out fast…To overcome its weaknesses the eurozone needs deeper integration through tighter economic governance and tougher rules for the stability pact. The challenge is to manage this without creating a split within the EU.”