Daily View: How will US react to Iran's nuclear power? 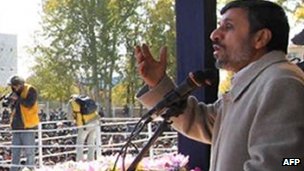 Following this week's publication by the International Atomic Energy Agency which accuses Iran of trying to acquire a nuclear weapons, commentators ask what this means for the relationship between Iran and the US.

The Telegraph's Con Coughlin says the IAEA's findings increase pressure on Western governments to do everything in their power to stop Iran from developing weapons, including military action to destroy Iran's nuclear facilities:

"In the immediate future, all the talk at the UN will focus on ramping up the sanctions programme against Iran - and winning the support of China and Russia, which is crucial to its effectiveness - in the hope that the mullahs can be brought to their senses.

"But given that most experts believe Iran will have the means to build a bomb within a year, military action may become inevitable if sanctions fail. As things stand today, it seems that the very different worlds of revolutionary Islam and Western democracy are determined on a collision course."

Real Clear World's Greg Scoblete gives five reasons why President Obama will bomb Iran, the last being that a nuclear weapon would threaten the US dominance in the Middle East:

"Ever since President Carter declared the Middle East a vital US interest, American primacy in the region has been a key plank in Washington's foreign policy. Sustaining a dominant position in the Middle East would be infinitely more difficult (though not impossible) once an Iranian bomb enters the equation. Large military bases, such as the ones housing the Navy's Fifth Fleet in Bahrain, would be instantly vulnerable to attack. An Iranian bomb would also deter the U.S. from attacking Iran, potentially freeing them to exert their own hegemonic influence in the region."

But Scoblete says in reality his money is on the US not bombing Iran. That's because of the detrimental effect a war with the country would have on US economy:

"If there's one reason above all others that likely stays the administration's hands it's the impact any prospective war against Iran would have on the U.S. (indeed, the global) economy in the short term. Economies in both Europe and the U.S. are wobbly, if not in outright recession territory. An attack on Iran would open the door for Iranian retaliation targeted at the industrial world's largest vulnerability - the 20 percent of global oil supplies that pass through the narrow chokepoint of the Straits of Hormuz. An Iranian attempt to close Hormuz would send oil prices soaring and almost certainly send the Eurozone into a recession (if it's not already there) and push America right back to the brink, or over the edge."

Simon Tisdall argues in the Guardian that a decision by President Obama to attack Iran would morally insupportable. But, given the pressure being put on him, Tisdall doesn't rule it out of the question:

"It all comes down to Obama because, in the end, the US alone has the military firepower to stop Tehran in its tracks. Now Libya, supposedly, is done and dusted, Israeli officials have turned hyper, talking up the Iranian threat and arguing the time for diplomacy has all but passed. Those glum doomsayers, prime minister Binyamin Netanyahu, defence chief Ehud Barak, and president Shimon Peres, are frantically ringing alarm bells like a trio of demented churchwardens. Something, they say, must be done, preferably involving some very large American bombs."

And Jeffrey Goldberg explains in Bloomberg why he thinks President Obama will heed Israeli pressure:

"The president has a deep understanding of Jewish history, and is repulsed by Iranian anti-Semitism. He doesn't want to be remembered as the president who failed to guarantee Israel's existence.

"This isn't to say that Obama has decided to use whatever means necessary to stop Iran. (He faces opposition in the Pentagon, for one thing, though the U.S. military has much greater capabilities than Israel.)"

Vice president of the American Foreign Policy Council Ilan Berman says in the New York Times that the US doesn't need to launch military action as the most effective way to stop building up nuclear capabilities in Iran would be punish the Chinese companies which supply Iran:

"Washington, worried about potentially destabilizing economic effects, has historically shied away from putting pressure on Beijing over its ties to Iran. But if the Obama administration is serious about halting Iran's nuclear program, it must do so by sanctioning companies like the China National Offshore Oil Corporation, or Cnooc, which has been developing Iran's mammoth North Pars natural gas field since 2006, and PetroChina (which supervises the import of some three million tons of liquefied natural gas annually from Iran). Both are publicly traded on the New York Stock Exchange and therefore subject to penalties under existing law. "