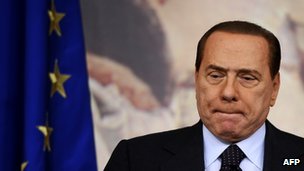 After Italian Prime Minister Silvio Berlusconi's announced resignation, commentators debate to what extent Italy's financial woes are down to him.

The Telegraph argues that the root cause of problems was not the prime minister but the country's membership to the euro:

"Even if a perfect government of national unity were to be installed, it would not address the underlying difficulty, which is not really Italian resistance to reform, but the euro itself. The bottom line is that Italy is in the wrong currency. It is certainly possible for economies to regain competitiveness through the painful corrective measures the eurozone prescribes - wage and spending cuts included - but the political and social damage of such an adjustment is going to be extreme."

The Times editorial also says that Italy's problems remain after Mr Berlusconi's departure and Italy can't take its eye off its commitment to balance its budget by 2013:

"Even once he is gone, Italy's economic problems will remain critical. They pose a threat to the eurozone far more severe than the indebtedness of Greece. The only prospect of rescue is radical structural reform of its economy coupled with far greater fiscal integration within the eurozone... The current financial crisis dwarfs any in Europe's postwar history. Mr Berlusconi's rapid departure will be a minimal but essential step to acknowledging and resolving it."

Cyrus Sanati at CNN Money says Italy's problems are from before Mr Berlusconi's got in to power:

"While it seems that the colorful billionaire is at times more interested in promoting his forthcoming album of Italian love songs than solving his nation's fiscal woes, Italy's problems predate his rule. Tough austerity measures will still need to pass if the country is to receive further assistance from the EU bailout fund and the European Central Bank. Berlusconi has already passed some tough measures that have put the country on the right course, but it still falls short of steering the errant battleship back to port."

Conversely the Guardian's editorial says that it is clear when you compare Italy to Greece that Mr Berlusconi was the root of the country's problems:

"George Papandreou's departure from office will weaken Greece, but Silvio Berlusconi's fall, assuming it now occurs, will strengthen Italy. The rates on Italian debt, after all, went down on rumours of Berlusconi's resignation, and then up again when he initially rebutted them. When he confirmed that he would quit once his budget has been approved later this month, the euro quickly rallied against the dollar.

"There can be no clearer indication that in Italy it is the man who is the immediate problem and not the country, whereas in Greece it has been the other way round."

Historian Andrea Mammone says in the Independent the legacy of "Berlusconi-ism" will run for a while more:

"Politics became a 'one-man-show' centred on the increasingly-absurd figure of Berlusconi: sexual scandals, police investigations, defence of his financial empire. This went along with increasingly hard-line proposals to stop wiretapping, change juvenile prostitution laws, and prevent journalists scrutinising politicians - it was an idea that modern democracies could be governed like a personal business without too much internal opposition and international interference. This was the triumph of personal interests over public duties and collective needs, and like the Emperor Nero, government leaders seemed to play the violin while Italy was financially 'burning'."